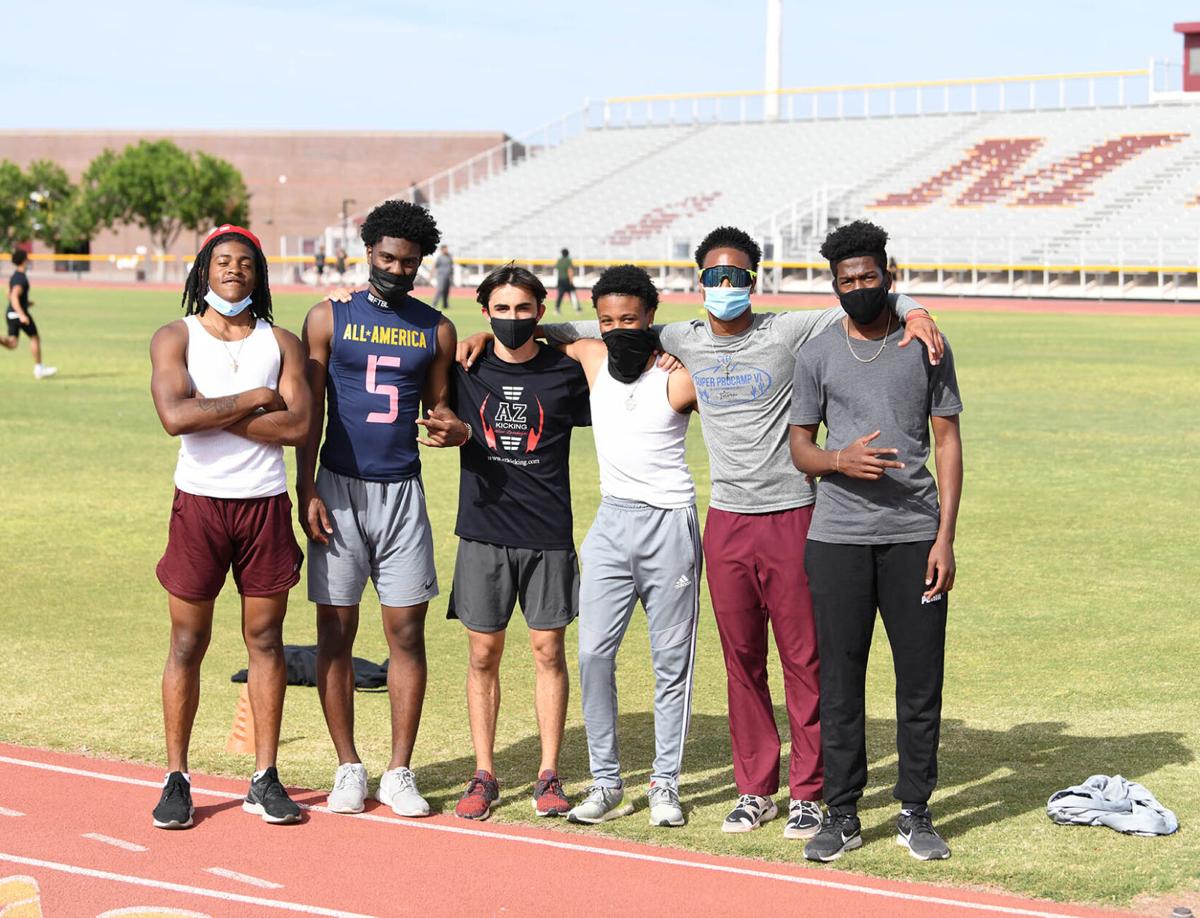 From left: Terryon Rowe, Amier Boyd, Matty Braun, Jhaylin Palmer, Jaden Crockett and Jacques Jones are among the 40 Mountain Pointe football players who decided to run track this season for the Pride. 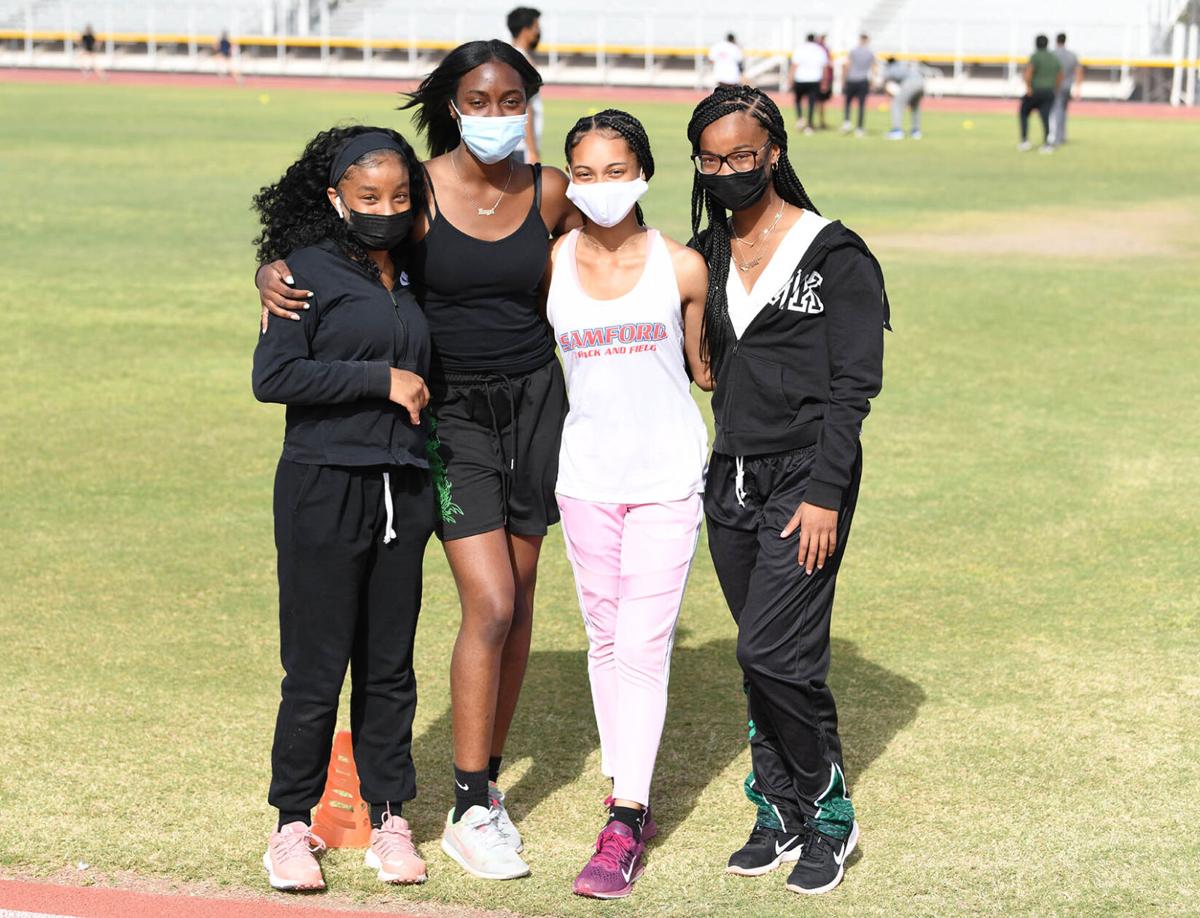 From left: Nalaejah Harris, Zaria Hamilton, Alaya Williams and Jai’dah Edwards are among the top girls this season on Mountain Pointe’s track and field team that has rebuilt after two adversity-filled years.

From left: Terryon Rowe, Amier Boyd, Matty Braun, Jhaylin Palmer, Jaden Crockett and Jacques Jones are among the 40 Mountain Pointe football players who decided to run track this season for the Pride.

From left: Nalaejah Harris, Zaria Hamilton, Alaya Williams and Jai’dah Edwards are among the top girls this season on Mountain Pointe’s track and field team that has rebuilt after two adversity-filled years.

It wasn’t long ago the Mountain Pointe track and field team made its case for one of the elite programs in Arizona.

The boys challenged at state as a team, winning gold medals in individual and relay events. The girls had similar success. But the program saw a decline in participation by some of its multi-sport athletes, which led to the Pride going through a bit of a lull with few state qualifiers.

Combine that with the unexpected death of former coach Larry Thomas in 2019 and the pandemic forcing an early cancellation to the 2020 season, Mountain Pointe was forced to essentially build from the ground up.

“There’s no secret to what this program was, it was one of the most winningest at the school,” Mountain Pointe head boys track coach Giovann Melendez said. “We just had to get the kids out here and I think a lot of them were just eager to get back to doing something because they’ve been sitting for a year.

“They’ve come out and are having fun and I think word kind of spread from there.”

Melendez was hired to take over the Mountain Pointe program after he came over from Marcos de Niza with head football coach Eric Lauer last year. A football coach by trade, Melendez saw an opportunity to build up the program with a group of football players, many of whom transfers, who ran track in previous years or simply wanted an opportunity to improve their explosiveness and speed.

He teamed up with head girls track coach John McCalister, who took over for Thomas after his unfortunate death. The two have been able to increase Mountain Pointe’s track participation numbers to near 100 athletes this season.

“I had to replace coach Thomas last year and it was tough getting kids to come out here,” McCalister said. “Our AD, Aaron Frana, brought coach Lauer over here and coach Gio (Melendez) over here and they’ve brought a new aura to the program.

“Now all of a sudden we see the football and track team merge together and that gave me time to recruit more girls. That changed the outlook of the program and we have a lot of girls that are very young and talented. We are definitely going in the right direction.”

One aspect of the program that has both coaches excited is the overall youth on the girls’ side.

The team is made up of just three seniors, with Zaria Hamilton leading the way as the self-proclaimed “mom” of the group. She has become a leader for many of the freshman and sophomore athletes on this year’s team.

A small group of girls just recently turned 14 years old. Melendez said they could technically still be competing at the junior high level. But instead, they’re running with juniors and seniors in their respective events. Hamilton said it’s created an exciting dynamic around the team as she attempts to qualify herself for the state meet in both the 200 and 400-meter.

“There’s some really fast girls that have given me a run for my money,” Hamilton said. “Even the boys’ side with a majority of them playing football. It makes me work harder because all of the young people out here are getting faster and stronger.

“My sophomore year I got into the prelims but didn’t qualify. I was scared we wouldn’t have track this year again because of COVID but to qualify as a senior, it’s exciting.”

The Mountain Pointe boys’ track team features a slew of multi-sport athletes, most of which from the gridiron.

Senior Jaden Crockett, who made a dramatic impact as the leader of Mountain Pointe’s defense after transferring from Alhambra last year, is among the team’s top sprinters this season. He competes in 4x100 and 4x400 relays as well as the 200-meter and 400-meter. His relay team is made up entirely of football players, including quarterback Chris Arviso, wide receiver Terryon Rowe, quarterback turned all-purpose player Amier Boyd and other young players.

Colton Jackson, a 6-foot-5 senior wide receiver last season for the Pride, is the team’s best high-jumpers. Lauer believes he can achieve the 6-foot mark this season with ease.

Having the more than 40 football players come out to run in the spring has helped Mountain Pointe field a team altogether. It’s also created a renewed sense of comradery amongst the other athletic programs the school has to offer. Aside from football, girls basketball players have also come out this season along with dancers, cheerleaders and others.

“I think people started to take into consideration they need to get bigger, faster and stronger for football and track provides that,” Crockett said. “Everybody wants to see everybody grow and get faster. Having all these coaches and athletes out here, it attracts even more. Everybody mixes in with everybody and it makes all of us better as a whole.”

Crockett is among the several Mountain Pointe athletes on both the boys and girls’ sides that have set new personal records this season in various events.

Mountain Pointe had an overall strong showing in the Nike Chandler Rotary on April 10-11, one of the biggest and most competitive track and field meets outside of the state championships in Arizona. The success of the team, while still in its infant stage, is encouraging for Melendez, McCalister and all athletes involved.

It’s yet another step toward improving the overall athletics at Mountain Pointe and reestablishing its track and field program as title contender on a yearly basis.

“Mountain Pointe has the athletes,” Melendez said. “It was always just a matter of getting them to come out and not stick to just one sport. We’ve started to fix that, and we hope we can get to the point where we get 200 kids out here.”