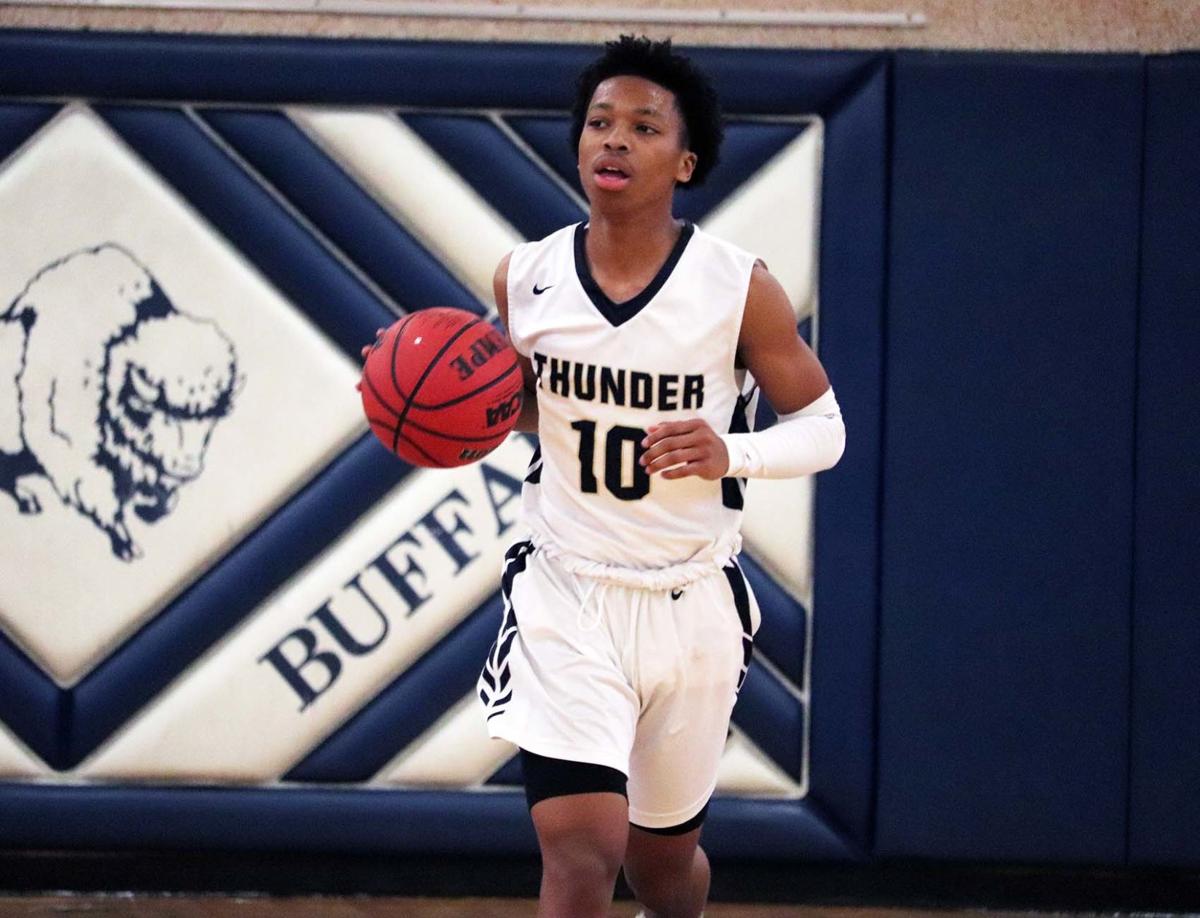 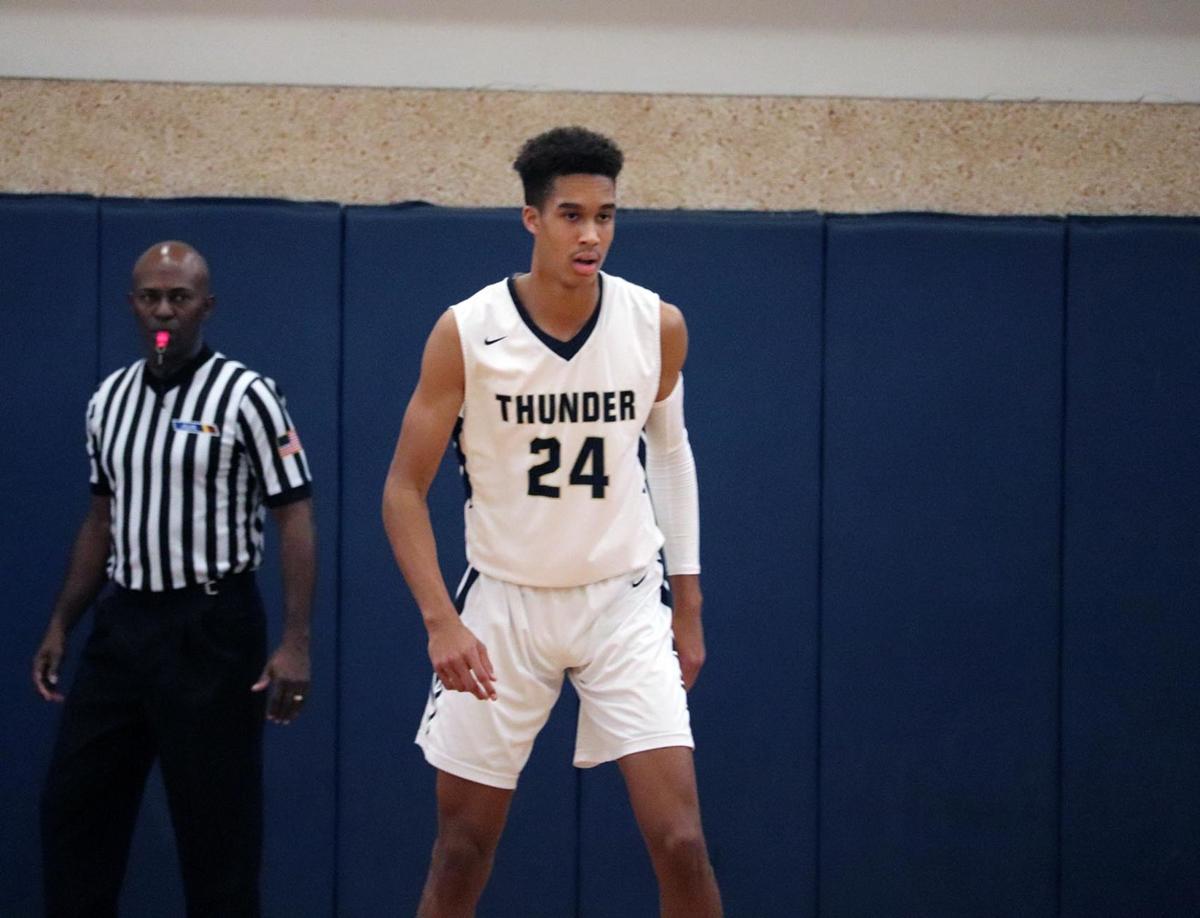 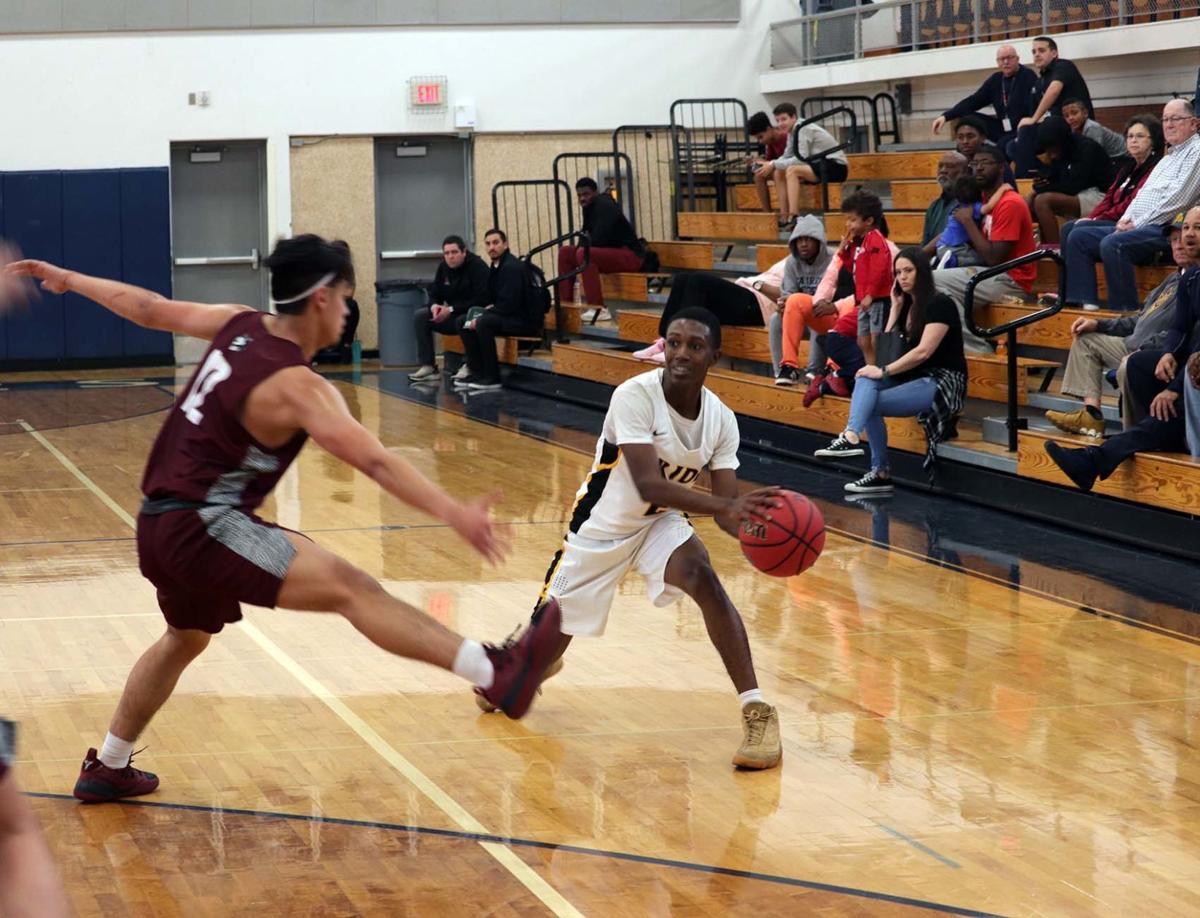 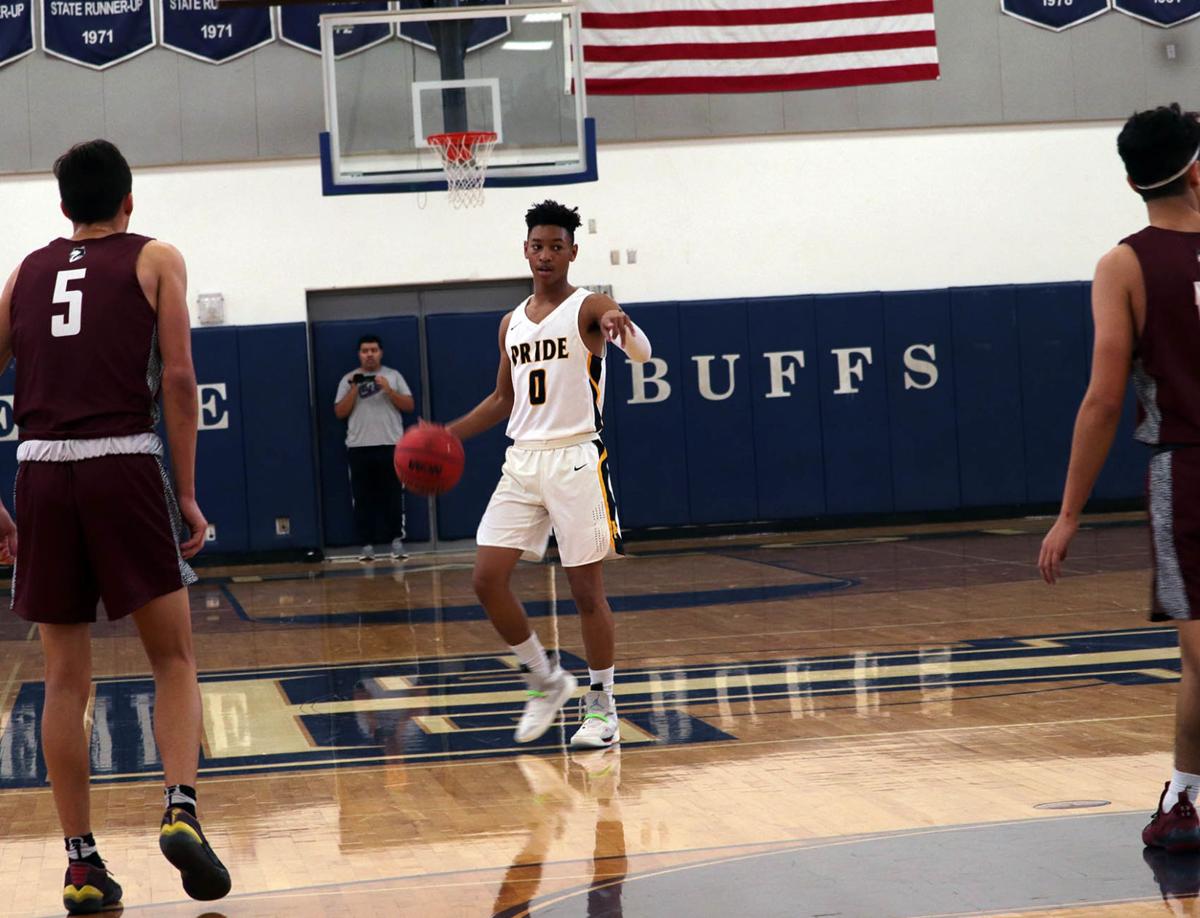 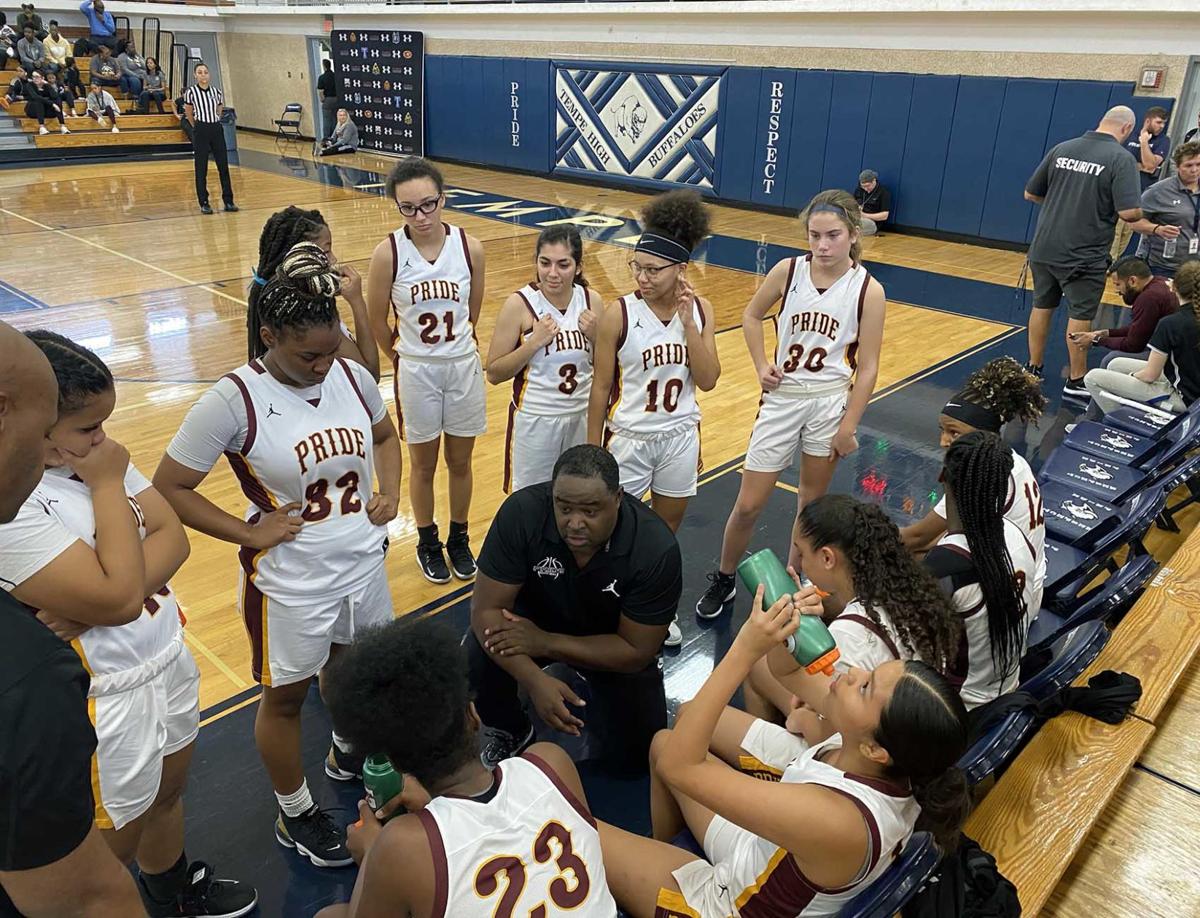 Mountain Pointe girls basketball coach Donnis Henry addresses his team during its game against Pinnacle at the MLK Dream Classic on Monday at Tempe High.

Mountain Pointe girls basketball coach Donnis Henry addresses his team during its game against Pinnacle at the MLK Dream Classic on Monday at Tempe High.

The MLK Dream Classic made its return after a five-year hiatus Monday, as Tempe High School played host to six games.

Both Mountain Pointe and Desert Vista were well represented at the tournament, with both the girls and boys Pride teams as well as the Thunder boys all playing.

“I let my girls know the premise of what we are doing here is bigger than us,” Mountain Pointe girls basketball coach Donnis Henry said. “You go back 30 or 40 years and none of this could have been possible.

“Black, white, indifferent, all in the same gym, playing basketball and sitting next to each other while enjoying the day. That’s what we are all here for.”

Mountain Pointe’s girls played in the second game of the day, as the Lady Pride took on top-ranked Pinnacle in a back-and-forth battle.

The Pride went to the full court press early on, pressuring Pinnacle’s starting guards to push the ball up the court. On several occasions, the Pride forced turnovers, which more often than not led to points in their favor. Despite being undersized with Pinnacle’s 6-foot-6 forward Kennedy Basham filling the paint, Mountain Pointe found holes in the Pioneer defense for easy baskets inside.

Led by sophomore Kishyah Anderson’s 19 points, Mountain Pointe traded blows with Pinnacle at each end of the floor throughout much of the second half after tying it at halftime.

Basham helped lead Pinnacle on a run late in the fourth to pull away from Mountain Pointe. However, the Pride once again looked to its defense to force turnovers and come within two points of the Pioneers. But late free throws by Basham, who scored 25 points, was enough for Pinnacle to come away with the 58-54 win.

“They give maximum effort, they knew they were right there,” Mountain Pointe girls coach Donnis Henry said. “I told my girls it wasn’t what we are doing, it’s the other team capitalizing on our mistakes. We are going to be fine. We can’t let this game beat us twice. We have to get ready for a tough Desert Ridge team.”

Mountain Pointe’s boys basketball program followed up the girls against the top-ranked team in 6A, Hamilton.

A technical foul was assessed against the Pride for a dunk during warmups, giving the Huskies an early 2-0 advantage. From there, Hamilton’s fast-paced offense took over as it was able to jump out to a 13-6 lead at the end of the first quarter.

Led by the combination of junior guard Jason Kimbrough and senior guard TJ Tigler, Mountain Pointe came storming back in the second and third quarters to tie the game at 33. The effort shown by the Pride to come back from a deficit is a characteristic that is common with this year’s team, which had lost its previous four games by a narrow margin.

“This team is resilient,” Mountain Pointe coach Kaimarr Price said. “But at some point, you have to show up ready to play. That’s been our biggest struggle since December.”

Despite Mountain Pointe’s comeback heading into the fourth quarter, Hamilton found a rhythm on both ends of the floor to pull away and defeat the Pride, 65-57. The Huskies were led by senior Jamar Brown, whose late-game heroics from the free throw line played a key role in his team’s ability to secure the victory and stay atop the 6A rankings.

Despite the loss, Price recognized the importance and overall meaning behind the tournament, adding that it was an “honor” to have taken part in a special event.

“It’s a huge honor to be able to be a part of this,” Price said. “To say Dr. King did amazing things for mankind would be an understatement. Just to play in a tournament honoring his legacy is special.”

Desert Vista’s boys basketball program was the last team from Ahwatukee to take part in the MLK Dream Classic. The Thunder, who are currently the No. 2 overall team in the 6A rankings, took on a Red Mountain team struggling to find consistency this season.

Led by another strong showing by senior forward Osasere Ighodaro and sophomore guard Desean Lecque, Desert Vista jumped out to an early lead and never looked back, defeating Red Mountain 83-53.

“They turned it up,” Desert Vista coach Gino Crump said. “We had a conversation after the third quarter and I told them if they wanted to be thought of as champions, they had to play like it. I think today we got close to the level of basketball I saw in the first few games of the season.”

Desert Vista led the whole way against Red Mountain, but the Mountain Lions closed the gap on several occasions. It wasn’t until the fourth quarter that Desert Vista managed to pull away for good.

Lecque caught fire from everywhere on the court, while Ighodaro did the same in the paint by overpowering a smaller Red Mountain lineup. Lecque finished with 19 points while Ighodaro had 18, a consistent theme among the two this season.

“It’s something we have come to expect from them,” Crump said. “Not to mention how dominant Oso is on the defensive end. He is going to be hard to replace.”

The Thunder wrapped up what was a string of three consecutive games featuring teams from Ahwatukee at the MLK Dream Classic. Crump admitted while a win is always nice, playing in an event with a special meaning behind it made it more special.

“When I first moved to Arizona I remember this tournament being such a huge event,” Crump said. “It’s a blessing for us to be involved in it coming back. I always wanted to be a part of this.”