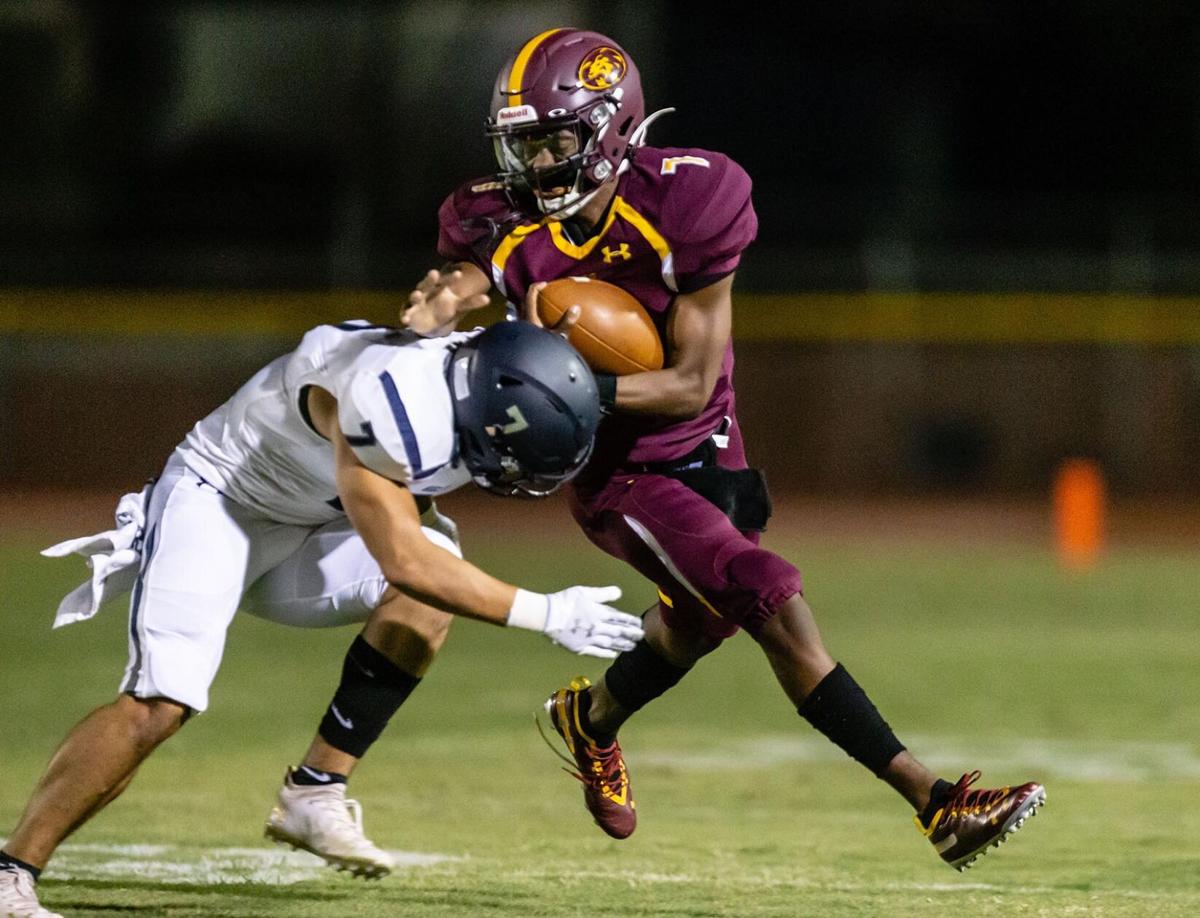 In front of a sparse crowd due to a limitation on the number of fans allowed to attend games, Mountain Pointe opened the 2020 season with a close loss to Higley, 26-18. 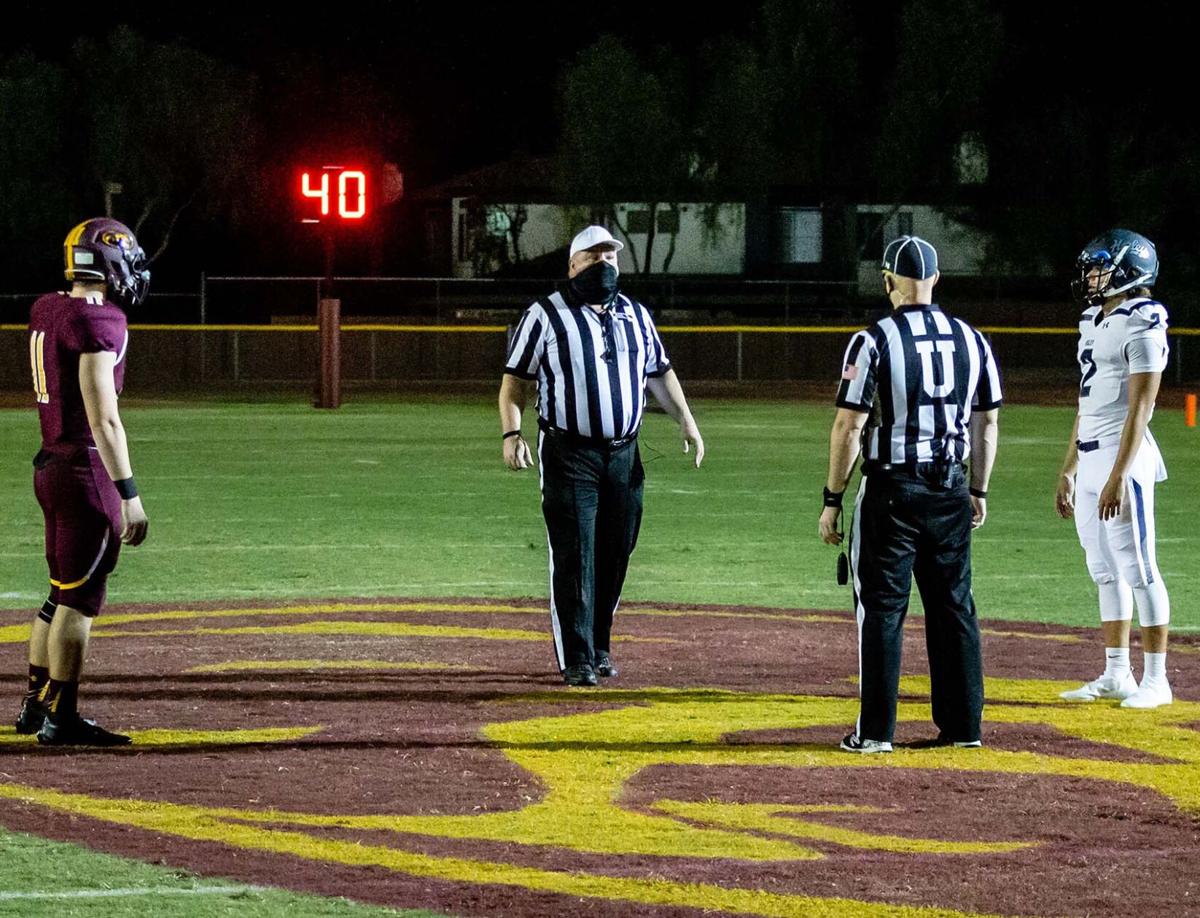 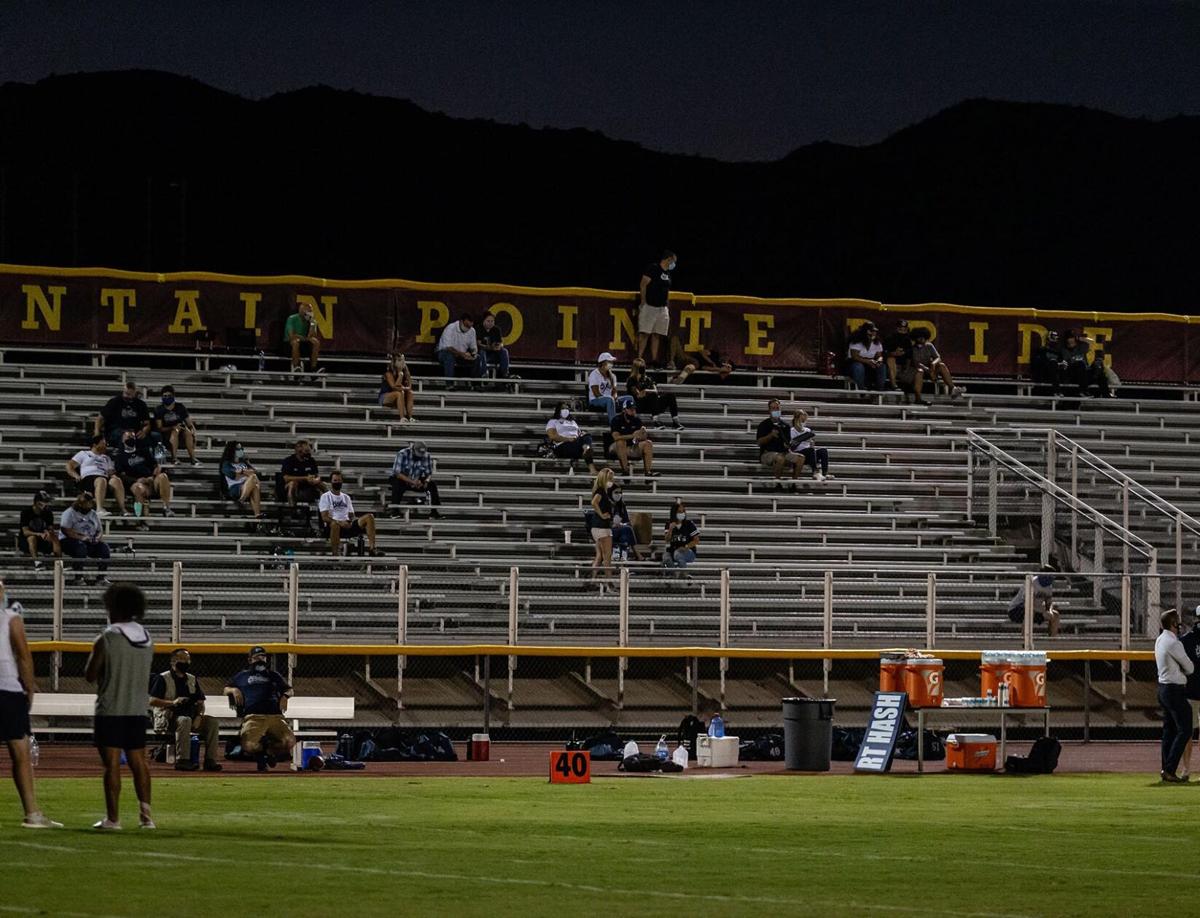 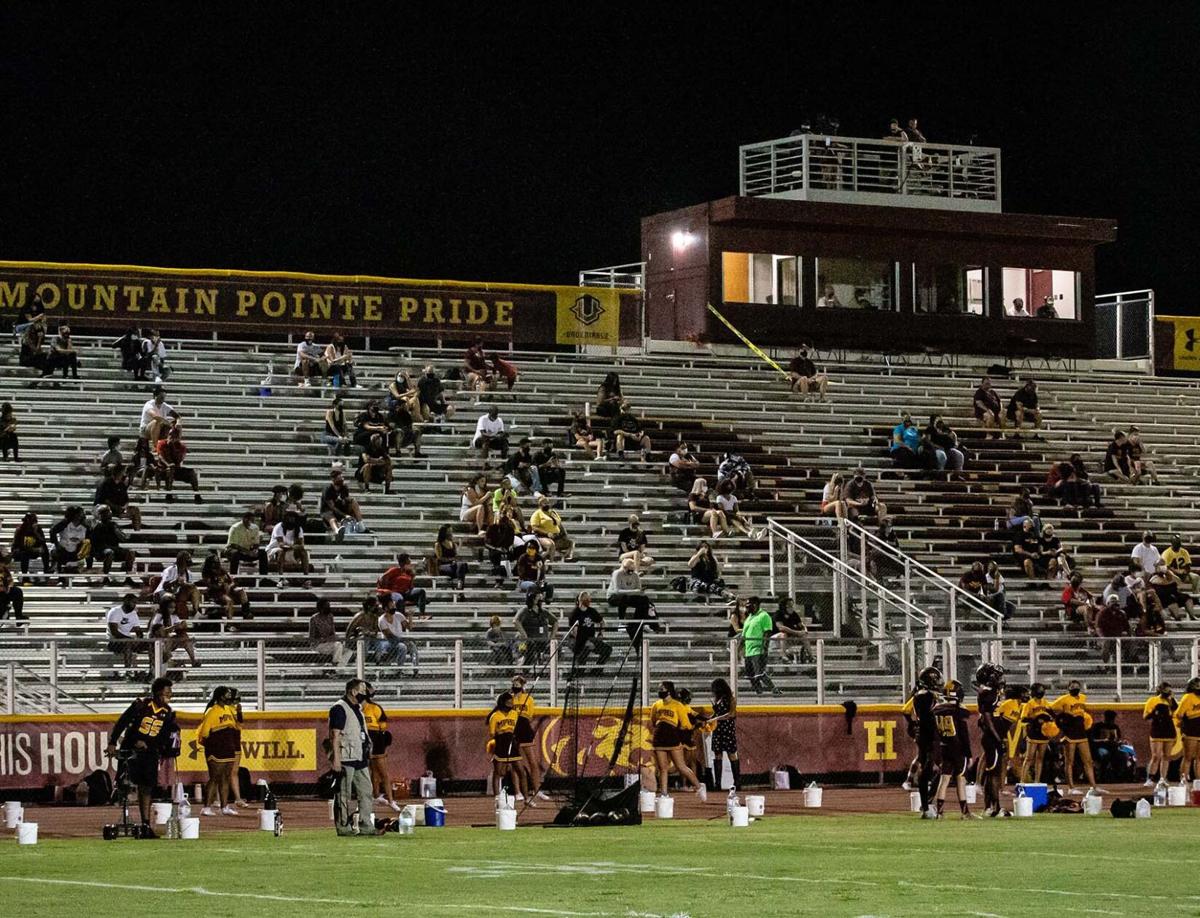 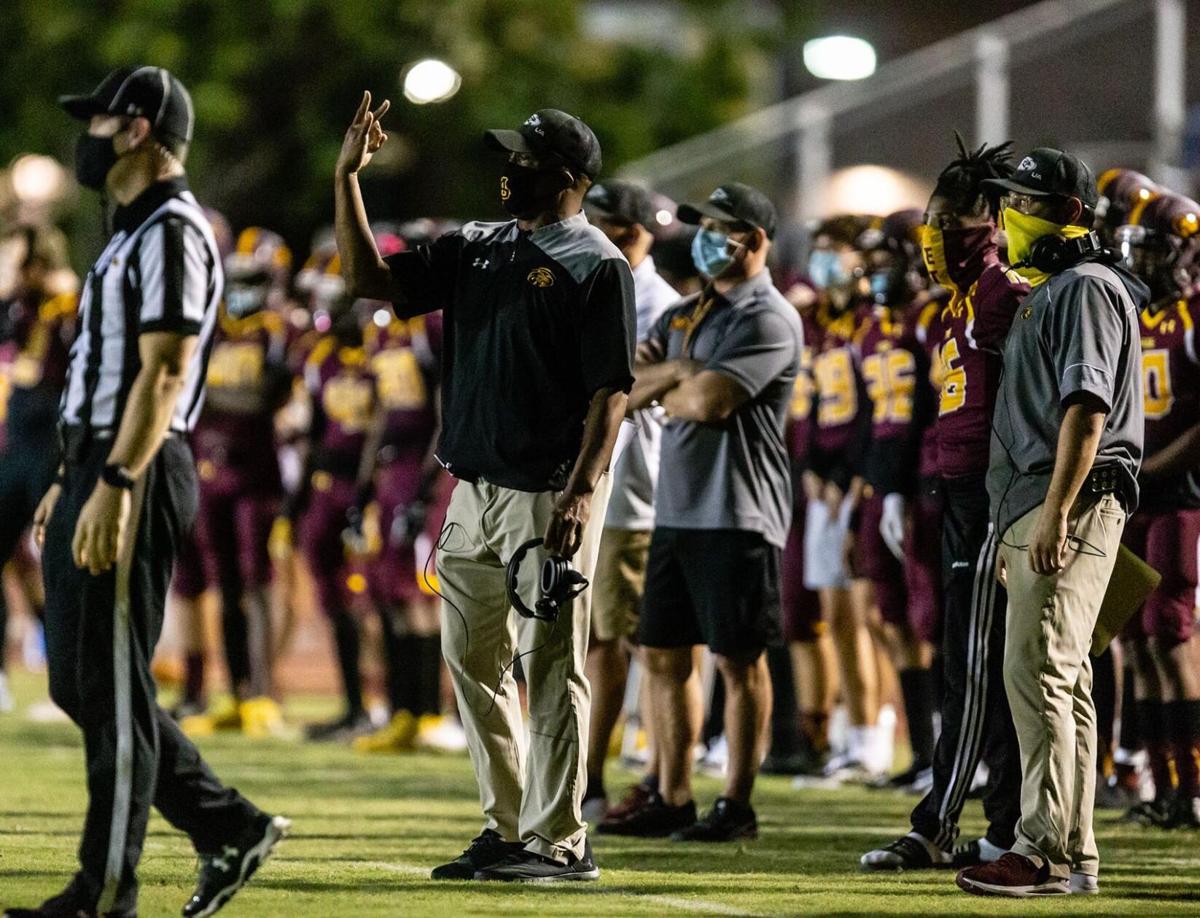 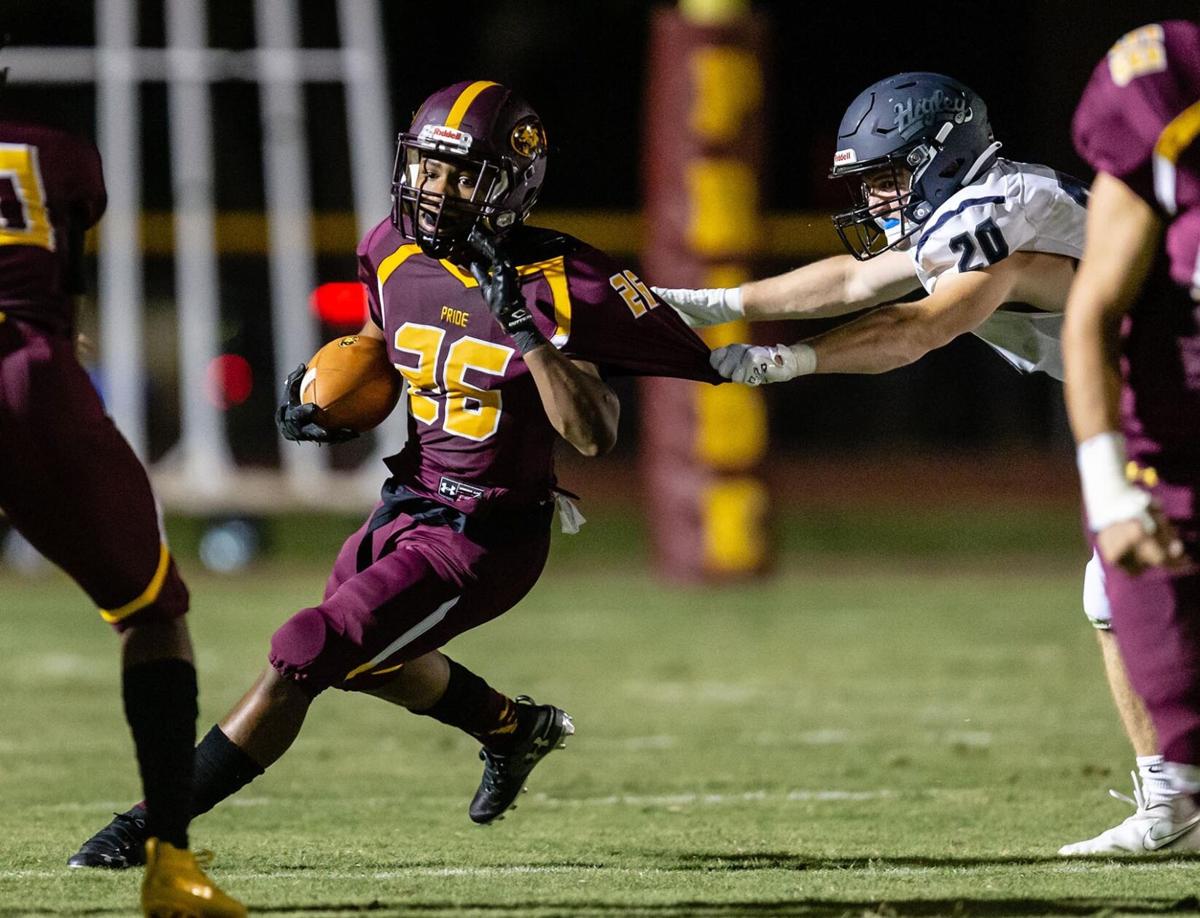 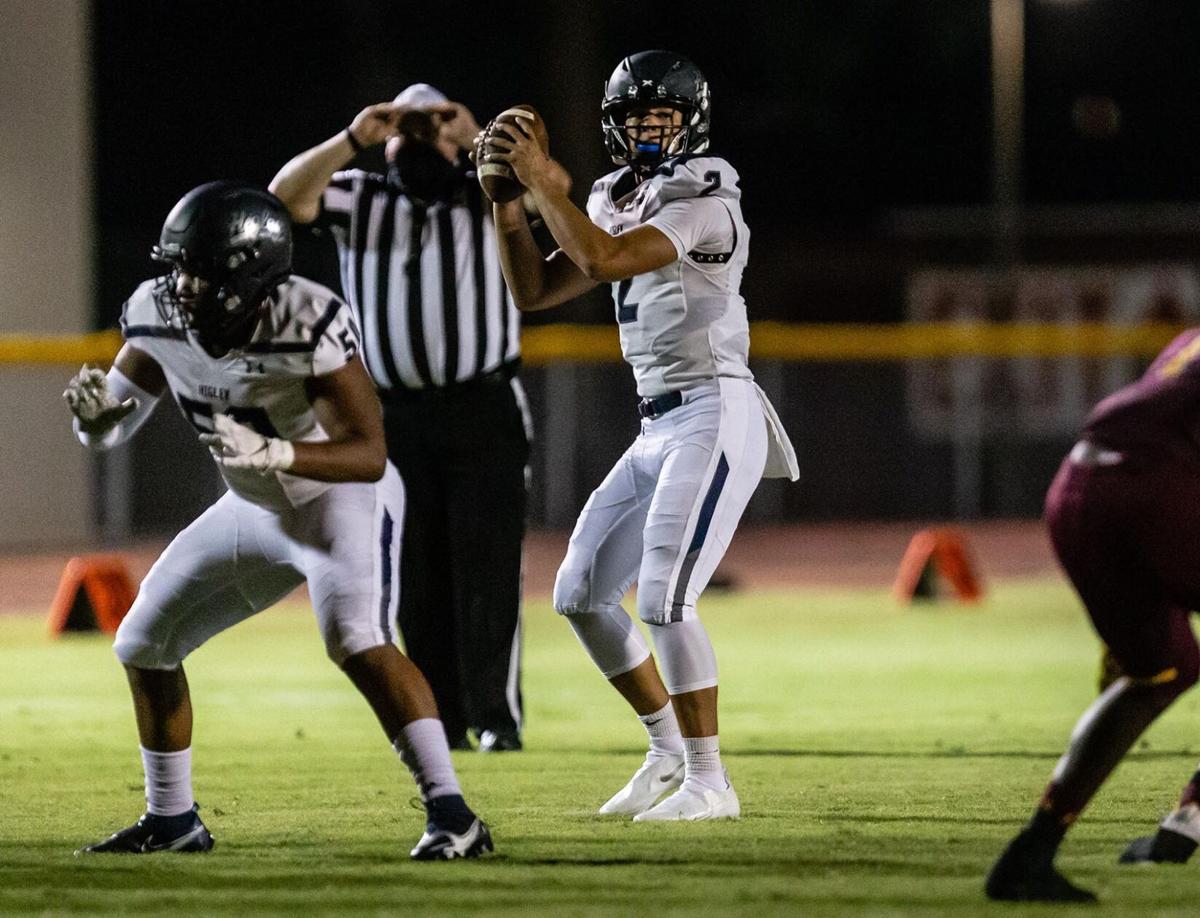 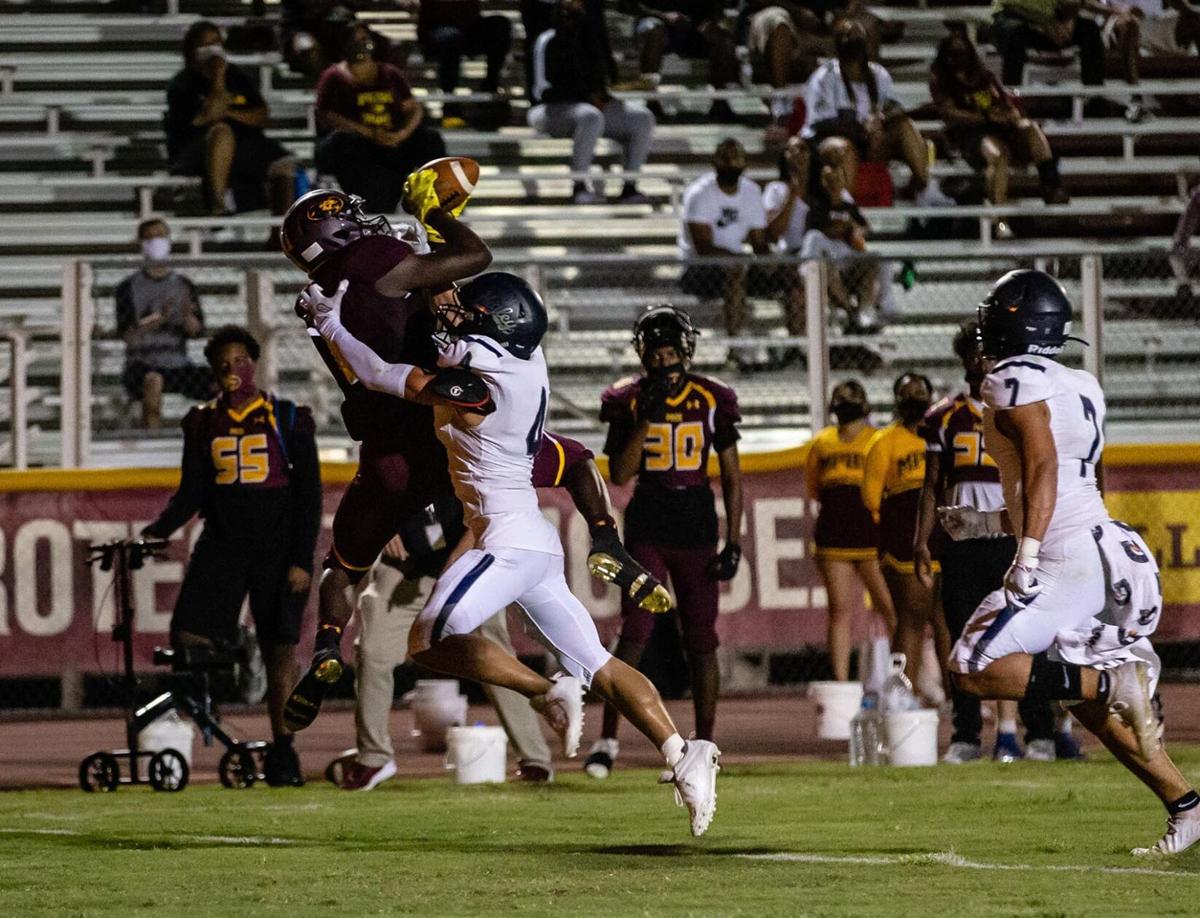 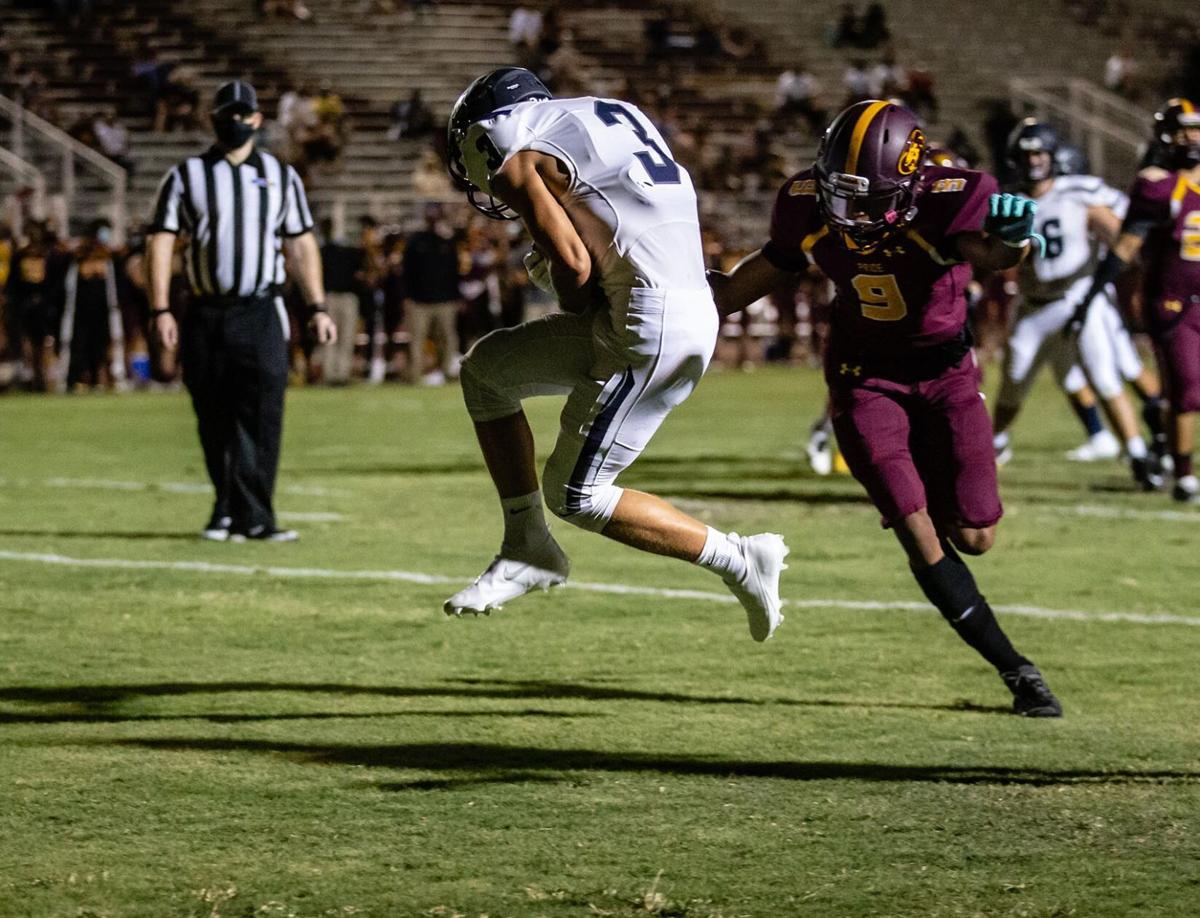 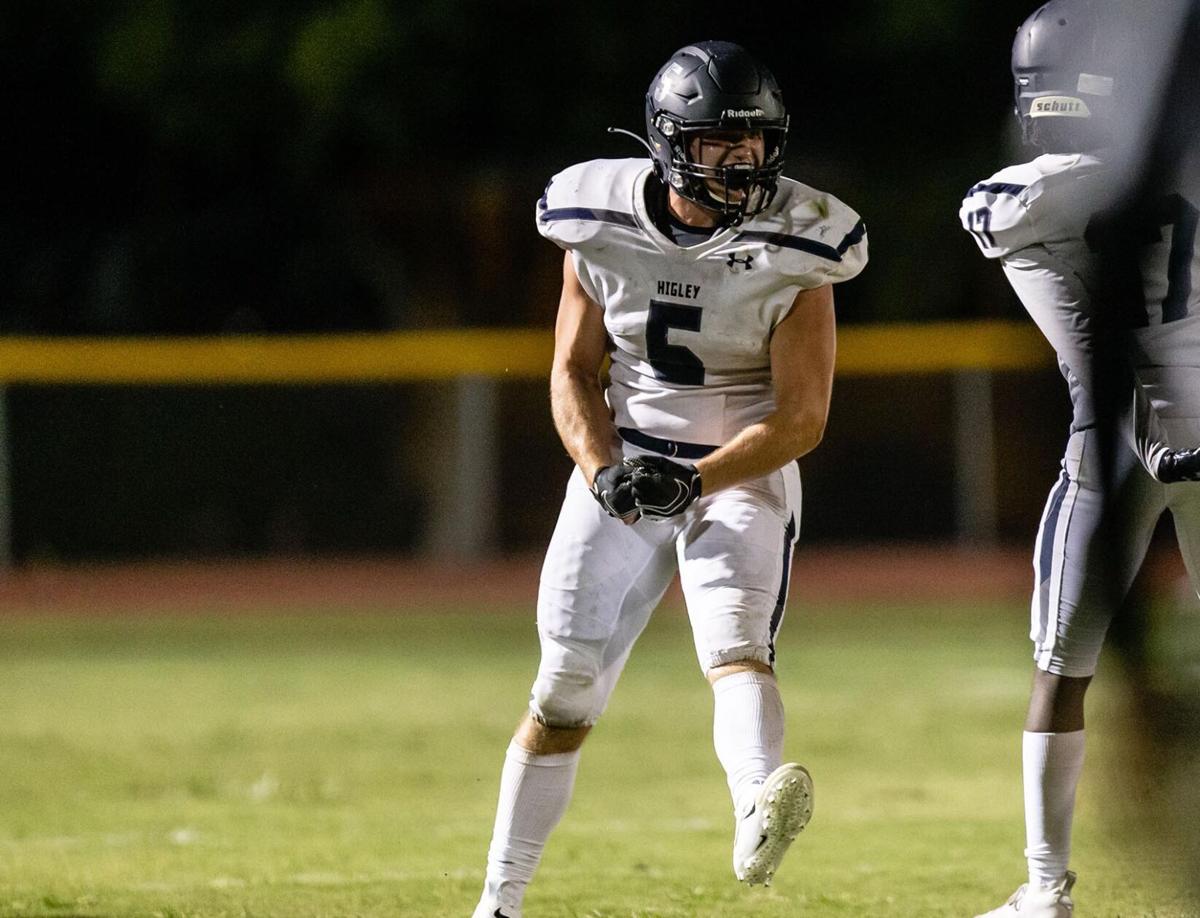 In front of a sparse crowd due to a limitation on the number of fans allowed to attend games, Mountain Pointe opened the 2020 season with a close loss to Higley, 26-18.

Mountain Pointe football’s season opener didn’t feel like those in years past.

The parking lot, usually filled to the brim, had ample space just 30 minutes before kickoff. Fans entering Karl Kiefer Stadium were met with signs enforcing the use of masks at all times and a Pride staffer wielding a digital thermometer. Tape in front of the entrance enforced social distancing. Once in the stands, fans were met with blue tape on each seat, meant for two people at a time to spread out as part of Tempe Union High School District’s guidelines for the allotted amount of tickets for each student-athlete.

There were no screaming students. There was no DJ. Only the faint cheers from a sparse crowd and the public address announcer could be heard during Mountain Pointe’s 26-18 loss to Higley in the Pride’s first COVID-era game.

“When the game gets going, I’m able to phase some of those things out,” Lauer said of the guidelines for players and coaches. “But from a fan and family aspect, I feel so bad for them because I know what high school football does for people across the country.

“This is a privilege. We need to appreciate it greater. That’s something we are trying to preach to our guys.”

Mountain Pointe’s players, with masks on underneath helmets while on the sideline, were asked to spread out on a consistent basis by trainers. Once in the game, however, it resembled some sort of normalcy, a feeling that hasn’t been felt since COVID-19 virtually shut down the world in March.

But players were quickly reminded of the strange times when they went for a water break. Buckets were placed on the track behind the bench. All were spaced 6-feet apart with individual water bottles inside.

“It’s really weird,” Mountain Pointe junior quarterback Amier Boyd said. “Just everything. Social distancing on the sideline, at least as much as we can do, the masks, the water. It’s different but you have to respect it. It’s what is allowing us to have a season.”

The lack of energy normally felt on Friday night’s in the fall slowed the pace of the game, as the first quarter lasted nearly 45 minutes. The long duration was due in part to strong defensive play from both teams. But the 15 combined penalties between Higley and Mountain Pointe was perhaps the main culprit.

Even with yellow laundry on the field a total of 32 times, both teams managed to find their way into the end zone.

The Knights took a two score lead late in the first half before Mountain Pointe answered with a score of its own on a 9-yard pass from Boyd to senior Jaden Crockett.

A shift in momentum at halftime led to a 6-yard touchdown run from Boyd to tie the game at 18. Higley, however, answered the call with a 3-yard run from senior Kayden Sutter followed by a two-point conversion.

Trailing by a touchdown and two-point try, Mountain Pointe’s defense kept Higley out of the end zone despite lost fumbles and turnover on downs from the offense. The Knights’ defense did the same, including stuffing the Pride offense at the two-yard line late in the fourth. With just over a minute remaining in regulation, Higley stopped Mountain Pointe just yards short of what would have been a first down to seal the victory.

“Our kids played well,” Higley coach Eddy Zubey said. “There were times when we lost the momentum and lost it then gained it back. I’m just proud of how they fought and stuck together.

“At times when some teams might fold, they chose not to and stuck together to pull off the win.”

Millner finished 13-of-27 for 132 yards through the air and added 54 more on the ground. Sutter led the charge out of the backfield, rushing for 68 yards while also involved on several key defensive stops for the Knights.

Mountain Pointe was led by Boyd and junior running back Cam Gillum, who combined for 263 yards on the ground. They were a bright spot for a team suffering from an abundance of injuries on both sides of the ball.

“I’ve never seen anything like it,” Lauer said. “Broken fingers, broken noses, all kinds of stuff. I hope in a month we are a totally different team executing on a higher level.”

The Pride players, while disappointed about the loss, remained positive. They had a chance to tie the game late. For players like Hay, who went through the disappointing 1-9 season last year as a junior, that alone shows the overall improvement with this year’s team.

“I was really happy with the way we played today, especially on defense flying to the ball,” Hay said. “We just shot ourselves in the foot with too many penalties.”

Mountain Pointe will host Centennial next Friday while Higley hosts Desert Ridge. Both games are scheduled to kickoff at 7 p.m.

Desert Vista opened the 2020 season on the road at district-rival Corona del Sol, a much-improved team with veteran leadership and experience.

The Thunder, led by junior running back Devon Grubbs, couldn’t muster any offense against a stingy Aztec defense in a 28-0 loss. Desert Vista entered the year young at several key positions, including quarterback with sophomore Jackson Akins leading the charge.

Desert Vista will look to bounce back next week as they travel to face Highland, which beat Desert Ridge 21-0 on Friday. Kickoff is at 7 p.m.