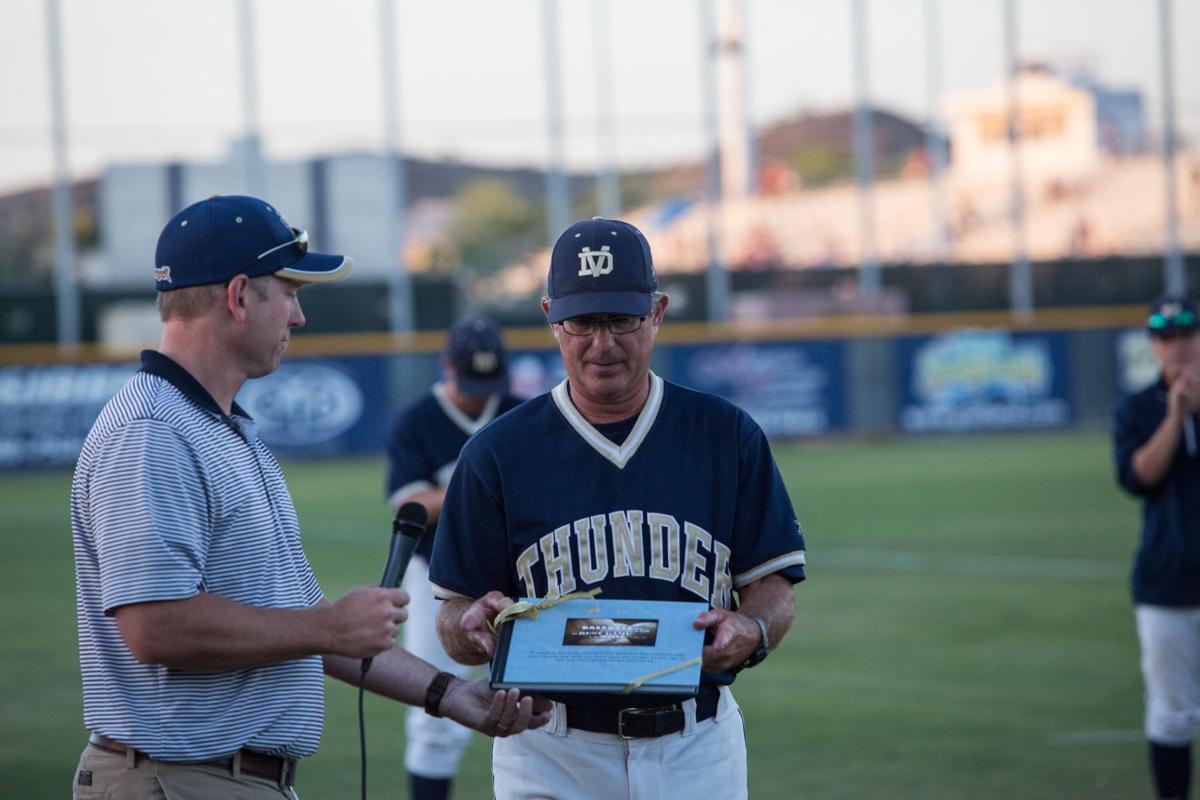 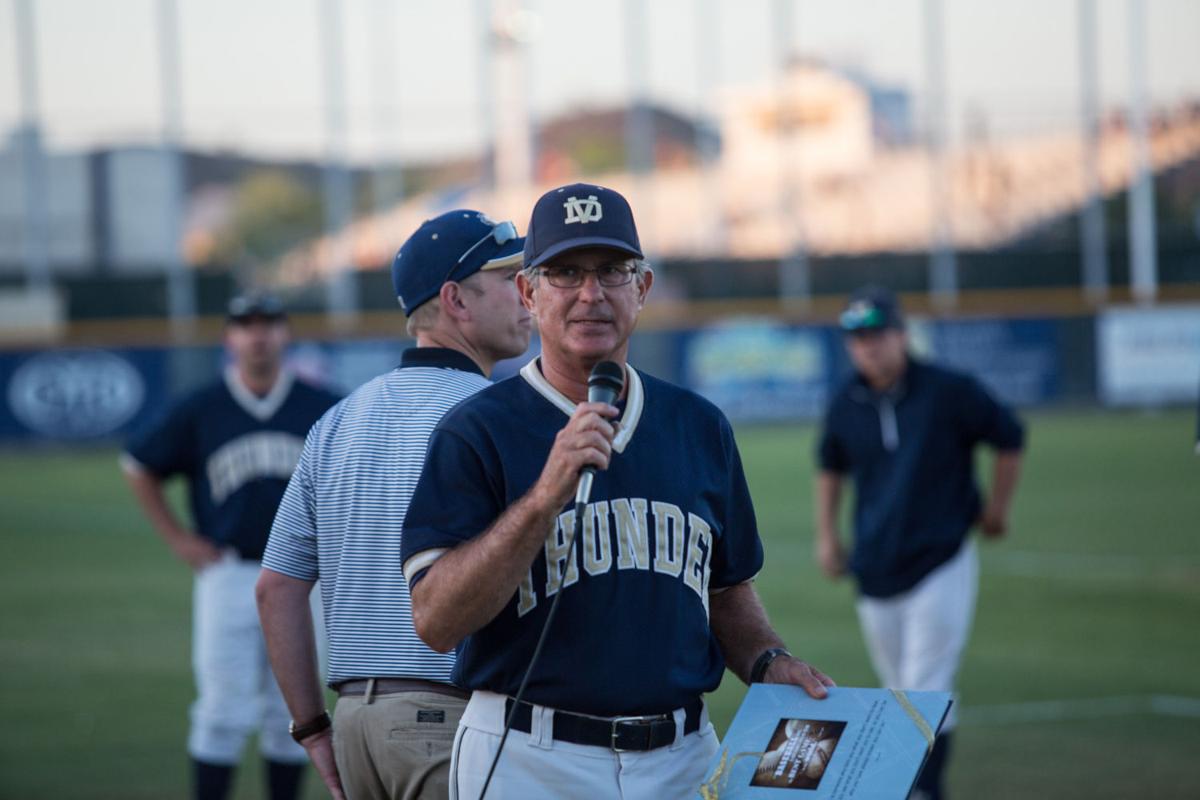 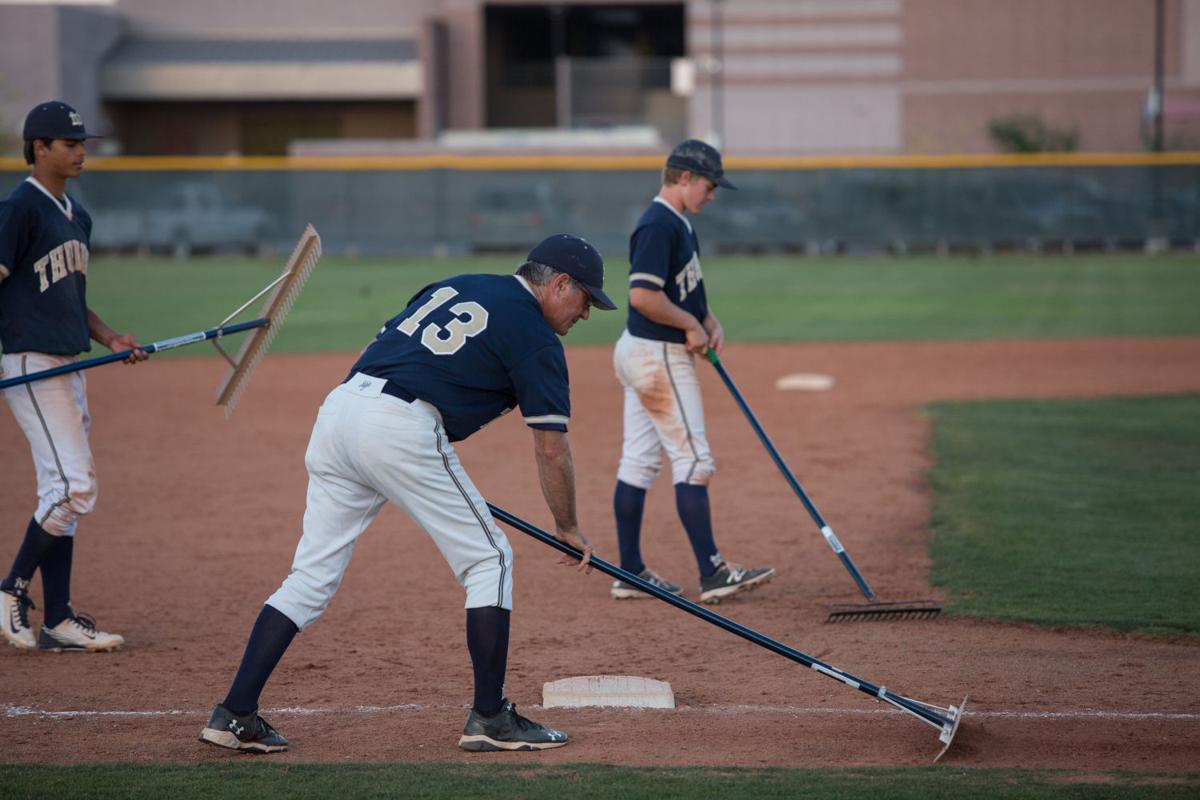 The interaction might have been a little awkward, but at the same time it showed a side of Stan Luketich that has been prevalent for 40 years, which was the reason for celebration in the first place.

In other words, Luketich’s succinct, self-deflecting moment when the microphone was in his hand and the spotlight was focused on his career instead of his Thunder went about as expected.

Coach Luke, as he is mostly known, wanted no part of Wednesday’s postgame ceremony to celebrate his 20th year at Desert Vista and 40th overall on the diamond.

“He only wants to attention to be focused on the players,” Desert Vista athletic director T.J. Snyder said. “I’ll probably get punched later for putting him in that position.”

Through it all Luketich, who received a memory book with inscriptions from players and coaches dating back to the first Thunder team, was appreciative of the effort put forth, the kind words said and the appearance of former player and coaches who have been with him throughout the years.

“I knew some players were coming back,” he said. “That’s all I knew. I’ll enjoy it at some point but I am still coaching.”

And he has no plans on retiring anymore than he will share stories of how he coached in the Yankees system, has been the manager for Spain, Belgian and Czech Republic national teams through the MLB Envoy program, which helps baseball organizations around the world that want help organizing and teaching baseball within their program, or the numerous awards he has won like the ABCA Ethic in Coaching Award.

It leaves it up to others to speak up about what it means to work with, be coached by or compete against the man who started out at Casa Grande Jr. High in 1975.

“He is such a great coach, and we’ve had so much fun over the years,” Mountain Pointe coach Brandon Buck said. “It’s been great for me to watch him and learn from him, and you don’t say that very often.”

Luketich moved on to Moon Valley where he stayed for 16 years, which included a state title in 1989, until 1993. After two years as an assistant at Red Mountain, he took over Desert Vista and had immediate success as the Thunder won state titles in 1999 and 2001.

The success at the state level hasn’t been what it was in the early years, but Luketich keeps churning out young men who are prepared for whatever lies ahead.

“We have a lot of good athletes who were better workers,” he said. “The kids today aren’t the same as 20 years ago, but they all wanted to work. That’s what I will remember.”

One of those kids in the early days was pitcher Ryan Coffin, who was on the mound when the Thunder won the state title in 1999.

“It’s pretty surreal coming back,” Coffin said. “We had the squad back then. We lived for baseball. It was great having someone like (Luketich) corralling all of us. We had a lot pressure and we obviously couldn’t have done it without him.”

Luketich’s short statement, where he essentially dropped the mike after thanking everyone from coming out on a hot day, was another teachable moment.

“You heard him with his speech,” Coffin said. “There is always a lesson and a point in everything he does. He taught us to be men and he taught us how to win the right way.”

The closest Luketich came to giving thanks and reflecting on all that he has accomplished - before shaking everyone’s hands and return to mending the infield dirt, where each speck of dirt seemingly has a place – was admitting how much he enjoyed seeing all the former Thunder players come back.

“I’ve had great kids every year,” he said. “It’s great to see them. We have guys come back all the time to practice or a game. They just come in the dugout.

"It is home and I want it to always be their home.”