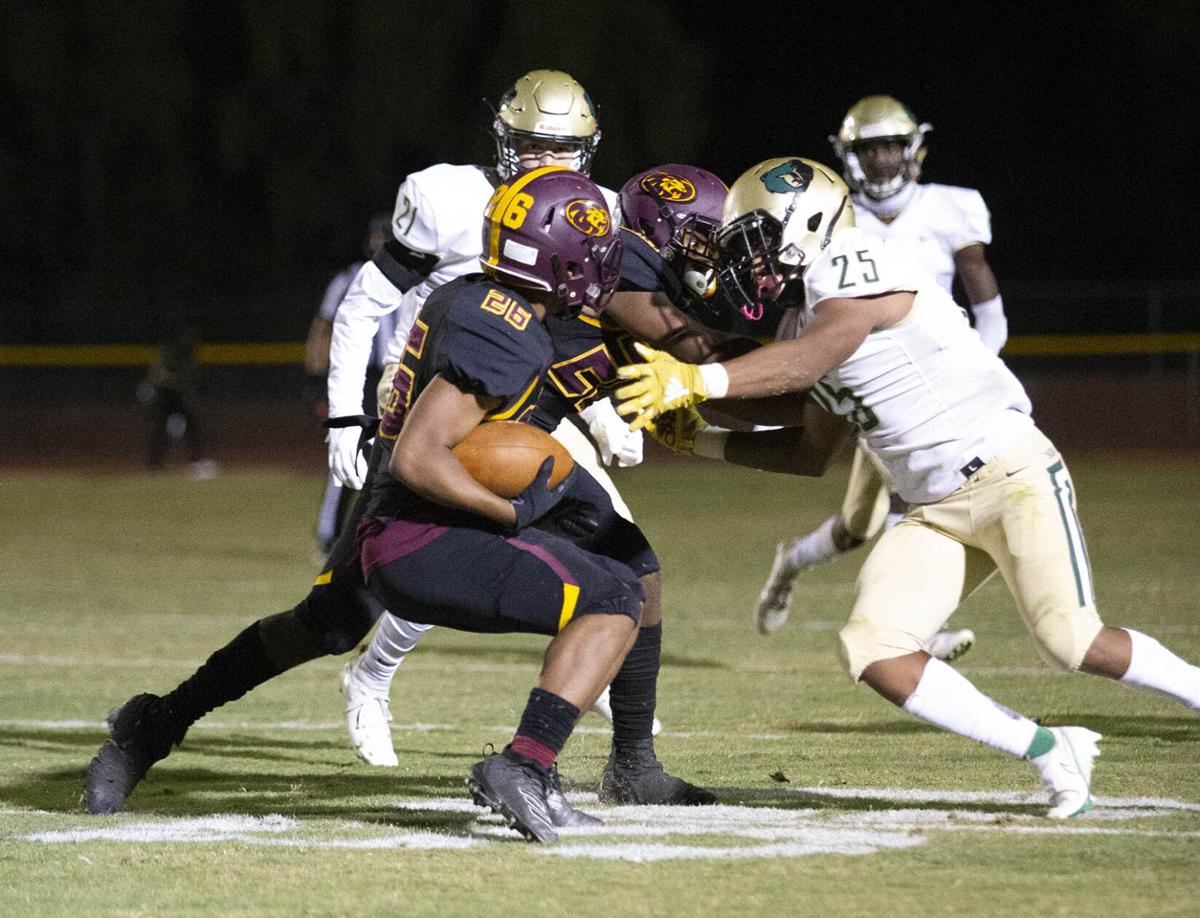 Mountain Pointe running back Cam Gillum shined for the Pride despite a 24-0 loss to Basha on senior night. 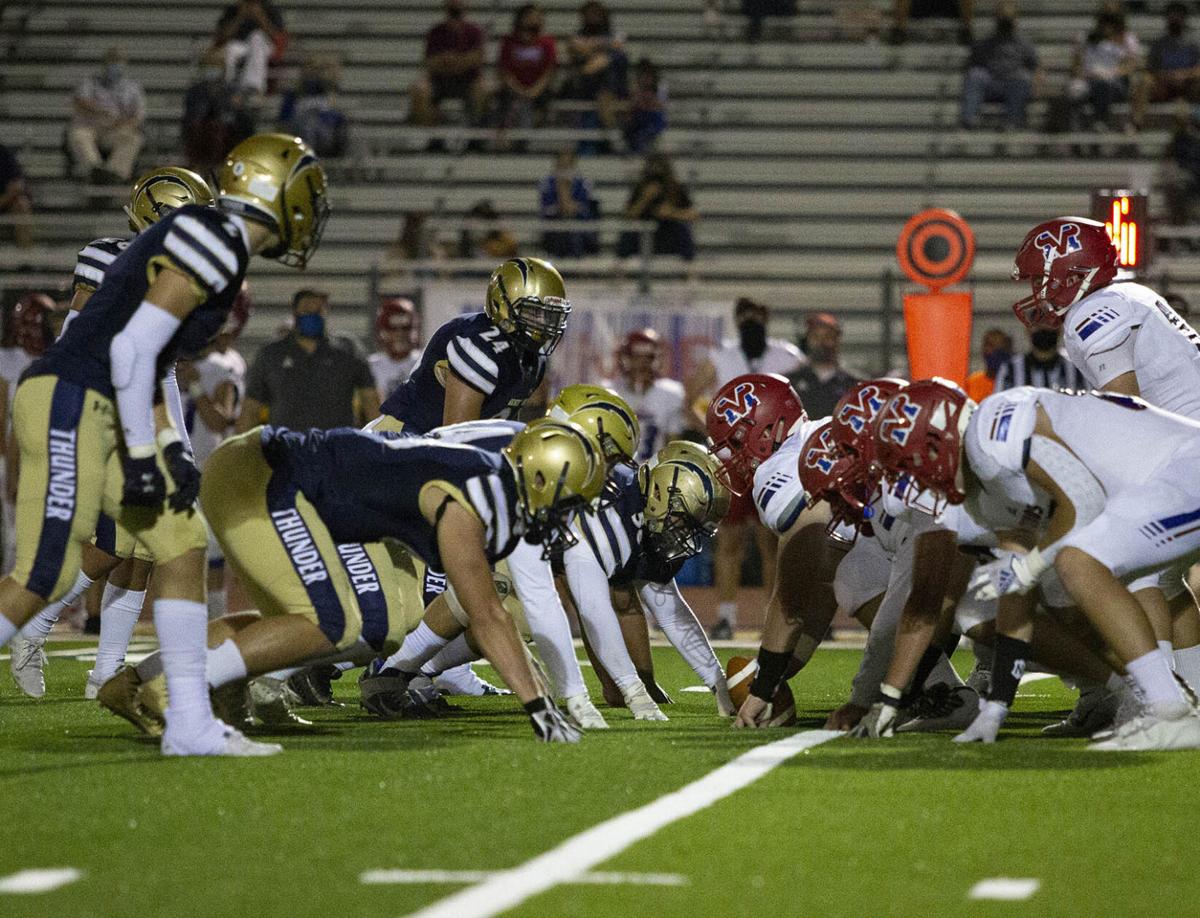 Desert Vista welcomed Mountain View as its first opponent on its new turf field and fell 35-21.

Mountain Pointe running back Cam Gillum shined for the Pride despite a 24-0 loss to Basha on senior night.

Desert Vista welcomed Mountain View as its first opponent on its new turf field and fell 35-21.

Ahead of Mountain Pointe’s matchup with Basha Friday night, head coach Eric Lauer said the key to the game was effort.

“It’s not what we’re running, it’s how you run it and the effort that you give in running it,” Lauer said. “We’re trying to turn the volume up. We’re trying to start fast and finish. We’re lions and we need to eat.”

While the Pride ultimately fell to the Bears 24-0, effort remained present.

In the first half Mountain Pointe’s effort was there. On Basha’s first series, freshman quarterback Demond Williams Jr. was hit hard in the pocket and picked off by senior safety Jason Ramirez.

The Pride took over in Basha territory but were unable to put any points on the board as they were stuffed on fourth down.

The Bears took over and got on the board fast as Williams Jr. connected with senior wide receiver Andrell Barney for a 46-yard touchdown. Barney finished the game with two catches for 99 yards and a touchdown.

Lauer said those two catches were the deciding factor in the outcome of the game.

The two teams traded multiple drives without putting points on the board throughout the majority of the first half. Junior Mountain Pointe running back Cam Gillum was the driving force behind the Pride’s offensive success. He finished the game with 127 rushing yards on 17 carries.

Led by Gillum, Mountain Pointe put together another solid drive towards the end of the second quarter, but they were forced to kick a 34-yard field goal which they missed.

Once again, the Bears took over and capitalized on the Pride’s mistakes as they drove down the field for another touchdown right before the half.

In the second half the game took a turn for the worst for the Pride. On their first possession of the second half, Gillum fumbled into the hands of senior Basha linebacker Abraham Lopez who took it 44 yards for a touchdown.

From then on it was all Basha, as the Bears defense forced two fumbles and an interception just in the second half.

“Our defense played really well. This was the defense’s game,” McDonald said. “We got better today. You hope that we turned the corner a little bit and now the kids see if they do their job, they can be successful.”

On the offensive side of the ball for the Bears, Williams Jr. finished the game completing 9-of-14 passes for 157 yards, two touchdowns and an interception. Although he moved the ball downfield with some huge completions, Williams Jr. attributed his successful night to the running game.

“The run definitely opened it up,” Williams Jr. said. “They (Mountain Pointe) came down, cover two, just gave it to us over the top.”

After Basha’s Week 5 matchup versus Desert Ridge was cancelled due to a COVID-19 concern, the Bears filled their schedule with Canyon View. McDonald said that his message to his team is to “Keep the mojo going.

“Consistently we’ve had really good practices and we need to continue to do that,” he added.

Lauer remains grateful Mountain Pointe was able to celebrate the seniors being on the field, especially because of the COVID-19 difficulties that have come with this season.

“We’re telling them every game is a championship because of that,” Lauer said. “If we have an outbreak we could get shut down. So, appreciate and have an attitude of gratitude.”

Next week Mountain Pointe (0-4) will look get in the win column against Corona Del Sol (4-0). Lauer said that heading into this game his team needs to work on the “core stuff.”

The Toros, who entered the game undefeated after an upset victory over rival Red Mountain the week prior, wasted little time picking up where they left off. A healthy mixture of its running and passing game with quarterback Willy Roberts helped Mountain View jump out to a 28-7 lead at halftime.

Desert Vista, a team learning how to fight every week, clawed its way back into the game late. But an interception by Mountain View defensive back Ronald Bruce ended the Thunder’s comeback bid.

Still searching for its first win, Desert Vista (0-4) will face a tough Hamilton (3-0) squad coming off a win over Saguaro next Friday at home.

Basha is an amazing and outstanding player of rugby. He has been playing with this team for the state since a long ago. He has shut the mountain pointee with his skills. Moreover he prefer us to visit cvlondon.net to enhance our skills easily, Keep doing better for the community. Playing is the essence of life.