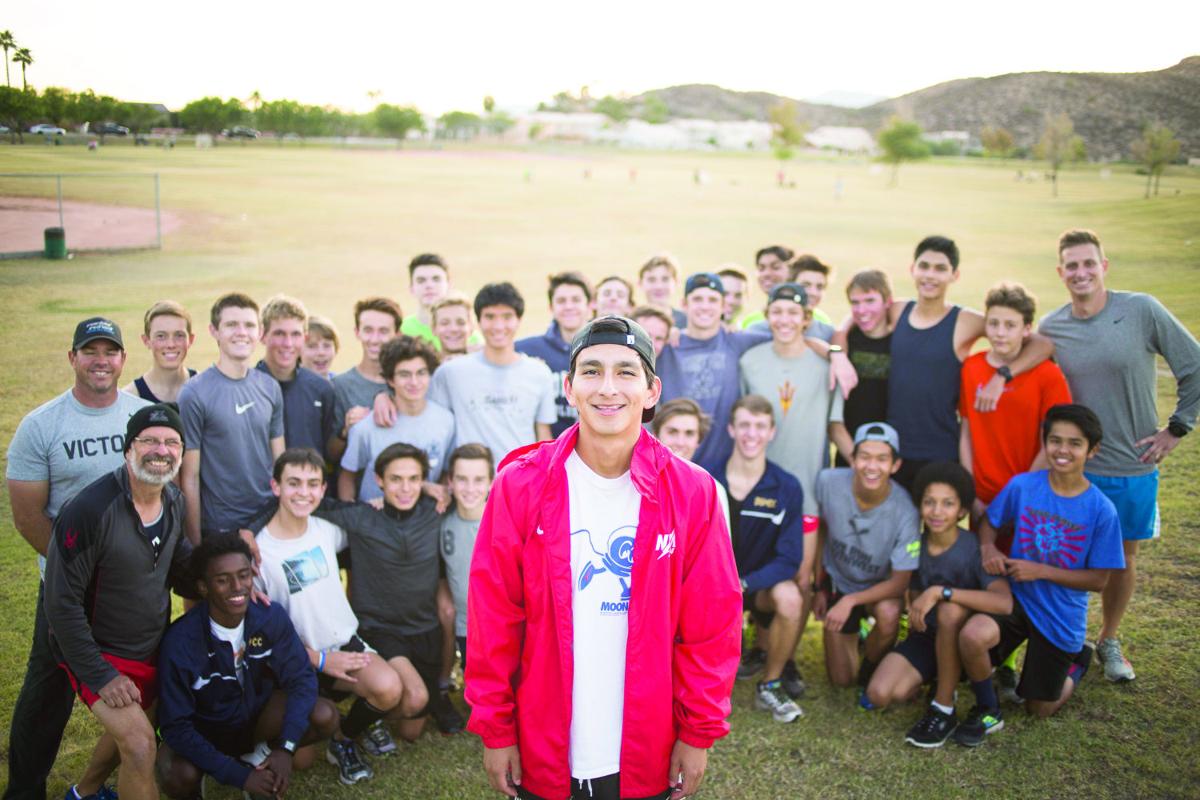 Desert Vista cross country runner Xavier Esparza with his second family after leaving the program for a bit after seeking out independence after turning 18. 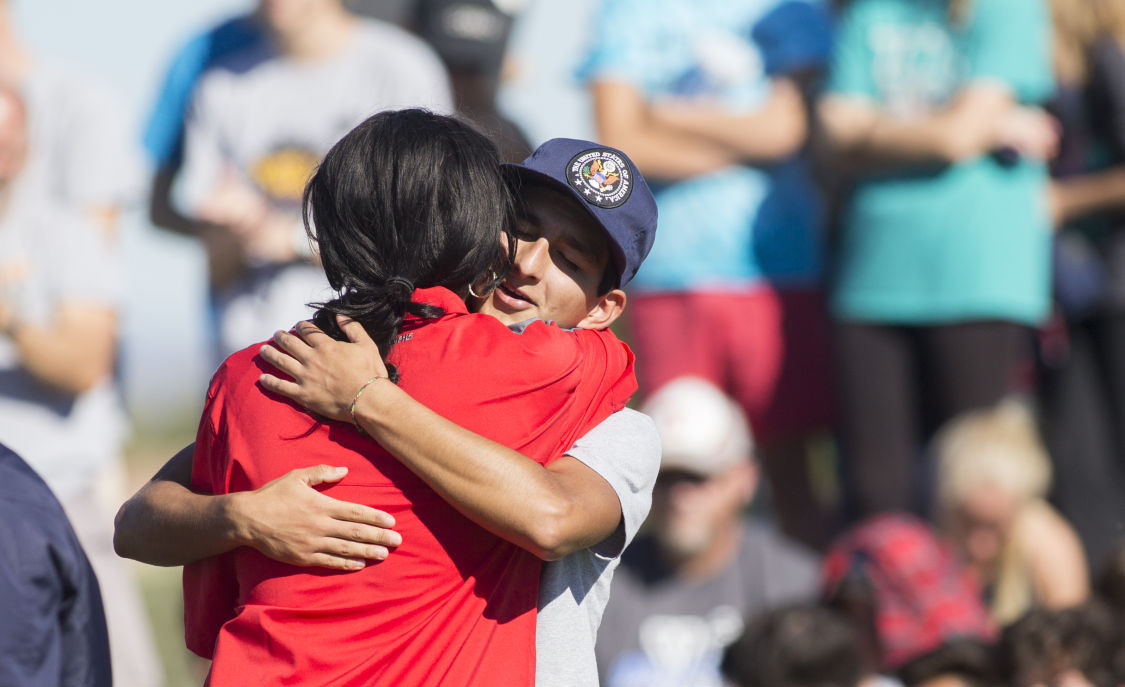 Desert Vista's Xavier Esparza, right, returned to the the Thunder cross country team after having to quit ealier in the season because he was living on his own soon after turning 18 in February and he needed to work in order to pay bills.

Desert Vista cross country runner Xavier Esparza with his second family after leaving the program for a bit after seeking out independence after turning 18.

Desert Vista's Xavier Esparza, right, returned to the the Thunder cross country team after having to quit ealier in the season because he was living on his own soon after turning 18 in February and he needed to work in order to pay bills.

Xavier Esparza sat in a chair in his own apartment that he could no longer afford, staring at a phone that he no longer owns today, trying to find the right words to send to a man he already spurned.

Before sending that desperation text, Esparza was contemplating just how he had already reached rock bottom at 18.

“I sat there thinking what I am doing right now with my life,” Esparza recalled. “I didn’t even know if I’d graduate. I just got fired, and I threw away my running career. That was the low point, and I couldn’t do it anymore.”

Esparza, who was pulled from his family’s home at age 12 to become a foster child, was despondent and humbled.

He struck out on his own soon after his 18th birthday – leaving behind the comfort of his adoptive home - to rent an apartment in Ahwatukee with a friend.

While it was nowhere near the conditions of the two-bedroom apartment, where discarded needles and corroded spoons were left behind from the heroin use of his mother’s boyfriend, Esparza found out quickly that taking on so much responsibility was the wrong choice.

The ramen noodles wrappers were only outnumbered by those from the Pop Tarts.

The only thing that was consumed faster was the balance in Esparza’s bank account.

Empty calories and dwindling cash are a way of life for high school kids, but they’d eventually get a home-cooked meal and another $20 from the parents.

Esparza had no such benefit.

“He tried growing up too soon,” Desert Vista boys cross country coach Chris Hanson said. “He was going down the wrong path. He did a complete 180. It took a lot of humility to own up to his mistakes.

“It was pride pushing him in the wrong direction, and it was humility that made him realize that he made some bad decisions.”

Sitting there in that chair, realizing he closed off the most important people in his life, being smacked in the face by the harsh reality of the responsibility that comes with being an adult, Esparza finally pushed aside his pride, and submitted.

“My Dad said he really wanted me to come back,” said Esparza, who hasn’t talked to his birth mother in three years. “I didn’t want to face up to my mistakes. I kept saying, ‘No, I am not coming back.’ I wanted to make it work, but I went back to my apartment and questioned myself.

“I threw away my whole running career, I was not doing well in school. I had nowhere to go. It wasn’t just that; that’s not why I went back. I thought about my life before I was adopted, and how it could have turned out. When I was young I never thought my life would be as great as it was, then I turned my back on it because I thought I was a man and ready.

So Esparza gave into the desperation, admitted the struggle was too much, and pressed send.

The text to his dad was accepted as warmly as the first time he walked into the home of Jean and Dan Abel six years earlier.

“He texted back, ‘I’m glad to hear you say that. We can have you home tonight.’ I was so grateful.’

Maybe not as much as the Abels, who have fostered 30 kids over the years but only adopted Esparza.

“Dan met him at school and told him it wasn’t working out, and he needed to come home,” said Jean, who was adopted herself. “Of course, he said it was. Later that day, he sent a text saying he was sorry for the pain he caused and wanted to come back.

“We are so happy to have him home. He is more responsive and talkative. We left it in God’s hands. He brought him back to us.”

The return home gave him stability, removed some of the premature responsibility he placed on himself and cleared his head.

It didn’t, however, clear the distance he created with his teammates and coaches at the premier Division I running program in Arizona.

He left the team early in the season, but before that he essentially disrespected them by missing early morning run sessions.

Working 36 hours at Chick-fil-A in order to pay rent and put some food in the fridge became the priority rather than keeping up with his running regimen with the Thunder.

“Over the summer, when he didn’t have school, he could work and keep up with us,” Hanson said. “When fall came, it all became too much. He did what he felt he had to do.”

And that was to walk away from cross country, a sport he has always used as a way to clear his head, and to become one of the leaders for the program.

He made an immediate impact as a freshman, continued to grow through the years, and was expected to challenge for an individual championship this season while helping the Thunder to their third state title in four years.

Yet most days instead of wearing the navy blue and gold of the Thunder, Esparza donned the greased stained red and white of his employer to survive his independence. “I knew they’d take me back, but it was embarrassing,” he said. “They put in the work all year, and I wanted to just show up again. I returned to my parents on a Wednesday and by Monday I was back with the team.”

But not without conditions. He was suspended from competing. He had to put in the miles, turn that burn in his legs and lungs into desire.

“I was heartbroken,” Hanson said. “It was out of my control. It was a tough time, but our team motto was – The struggle makes us stronger. Little did we know how much it really meant for him.”

Esparza, who is still in contact with five of his seven siblings, made his way back into good graces, ran at sectionals and came in fifth at the DI state meet, finishing the 3.1-mile course in 16 minutes and 8 seconds, to help the Thunder hoist the trophy again.

“It was great having him next to me (at the starting line),” said Thunder senior D.J. Harris, who won the individual title. “Xavier was a huge part of what we’ve accomplished. We didn’t understand everything he was doing, but we knew what he meant to this team.”

Hurry up and slow down

Esparza wanted too much too fast. Like many teens, they think they have all the answers. They don’t need anyone.

“Despite much discussion and encouragement, he shut us out,” Hanson said. “He was doing it his way. I don’t know what happened. Maybe he hit bottom. It was enough. I’m just glad he returned. It was nothing short of a miracle.”

It really hit Esparza, who hopes to find a way to continue running in college, really hard on the bus ride to Cave Creek with his teammates for the state meet.

“I never thought I’d be here again,” he said, holding back tears moments after crossing the finish line on Nov. 7. “I’m with the best team in the state, one of the best in the country. I just pushed through, and I was thankful for my teammates. They got me through the hardest part.”

He thinks back on his stubbornness, his need to venture out on his own and the struggles and just shakes his head.

“You think you can do it, but when you are out there it is really tough,” Esparza warned. “There are so many things you take for granted. Look at what you have now and know that you are truly blessed.