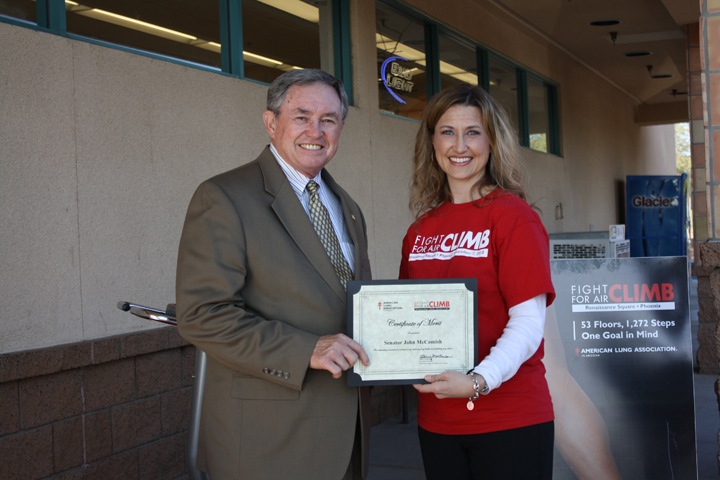 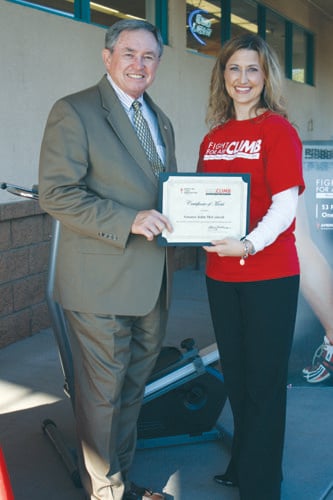 The American Lung Association toured Ahwatukee Foothills this week to inform residents of the need for Chronic Obstructive Pulmonary Disease (COPD) and lung cancer awareness as a pre-kickoff before Saturday's Fight for Air Climb downtown.

The group set up a table outside of an Ahwatukee Walgreens on Tuesday to spread the word about their walk.

"We focus mostly on asthma, air quality, tobacco awareness and COPD, and also send some of that money for lung cancer research," said Stacey Mortenson, executive director of the lung association's northern Arizona region. "It just so happens that November is COPD Awareness Month, as well as Lung Cancer Awareness Month so it's very fitting that we have a big event where people can come out and bring some awareness to those two diseases in particular.

"I think they are diseases people aren't super familiar with. They've maybe heard of them, but don't know things like COPD is the third leading cause of death in the United States. Lung cancer is the leading cancer killer and it seems to fly under the radar a little bit. These are things we need to be paying a little more attention to. We always say all of a sudden when you can't breath there's nothing else in the world that matters to you. Breathing and breathing clean air is important to all of us."

State Sen. John McComish came out to support the lung association in its efforts.

"I'm glad that you're getting the word out," McComish said. "I had no idea that COPD was such a huge killer. I also think smoking is going down so you sort of think lung cancer would be going down but, obviously, it doesn't go away. Good for you for what you're doing, and good luck on Sunday."

COPD is an umbrella term for anyone with emphysema or chronic bronchitis. Mortenson said they believe many cases are undiagnosed. The American Lung Association has a questionnaire that can be filled out to decide if a visit to the doctor is necessary to check for the disease.

"We have available on our national website some resources for patients with lung cancer," Mortenson said. "We also have information about clinical trials that could be very important to people if they want to seek new treatments."

The pre-kickoff event was one of six happening across Phoenix. For more information on the American Lung Association, visit lungusa.org.

Patterson: Letting business thrive? They just don’t get it

Andrei Cherny, the chairman of the state Democratic Party and unsuccessful candidate for sta…

It all began by chance, a casual conversation over a glass of wine and a bit of food. About a month ago, Parker Smith sat down at the bar at Satara, a Thai restaurant and boutique wine bar in Peoria’s entertainment district. Smith, who lives in Sun City, struck up a conversation with the restaurant’s owner, Jon Graham.

Youfit Health Club is opening an 18,000-square-foot facility at The Promenade at Fulton Ranch.

For military mothers Brenda Searle-Sung and Theresa Koontz, every member of the military, either past or present, is one of their children.

As part of the organization Blue Star Moms of the Southwest Valley, the women send up to 60 care packages to overseas troops containing much-needed supplies and items with a more personal motherly touch like knitted hats.