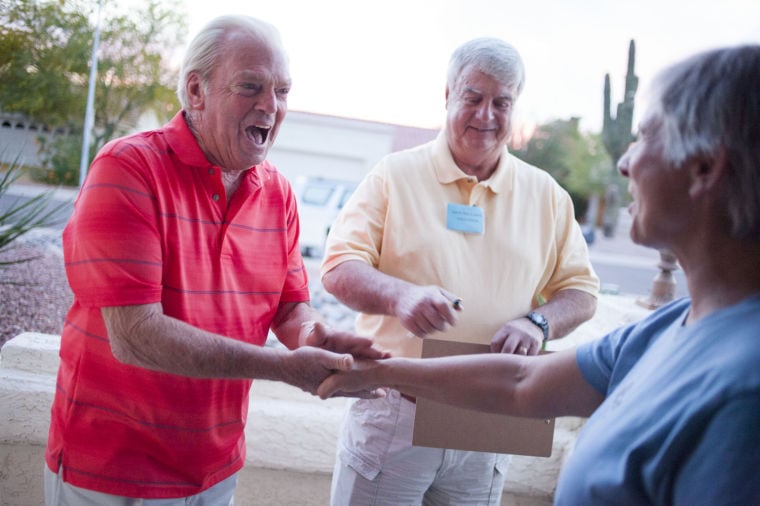 Jack Karkosky (left) and John Scott talk with Sondra Bates about signing a petition to Save the Lakes on Wednesday, April 9, 2014. 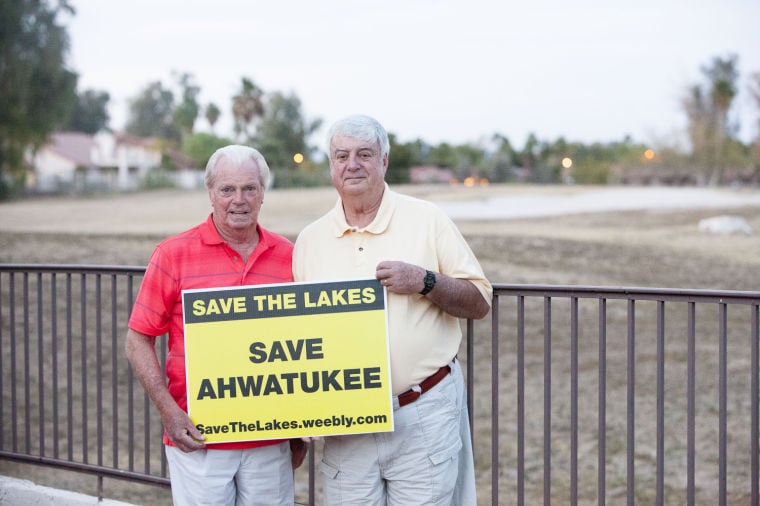 Jack Karkosky (left) and John Scott are petitioning to Save the Lakes on Wednesday, April 9, 2014.

Jack Karkosky (left) and John Scott talk with Sondra Bates about signing a petition to Save the Lakes on Wednesday, April 9, 2014.

Jack Karkosky (left) and John Scott are petitioning to Save the Lakes on Wednesday, April 9, 2014.

Two Ahwatukee Foothills residents and members of Save the Lakes have filed a lawsuit against the owners of the closed Ahwatukee Lakes Golf Course, hoping to get an injunction from the court that would force the owners to restore the land to its former condition.

The lawsuit claims the owners of the course violated the CC&Rs for the land by closing the course. The two plaintiffs in the case, Eileen Breslin and Linda Swain, are not asking for monetary damages. They are asking the court to find the course owners in breach of contract and order them through an injunction to restore the land to a golf course.

Tim Barnes, attorney for the plaintiffs, said the CC&Rs (Covenants, Conditions and Restrictions) over the land are a contract between the landowner and those who benefit from it.

“Every contract, whether a contract for a purchase of a home or to loan somebody money, every contract has implied into it a covenant of good faith and fair dealing,” he said. “Good faith and fair dealing in a legal sense means the parties to the contract must not do anything that deprives the other party to the contract of the benefit of what they bargained for. … From my perspective, it was pretty easy to figure out, looking at the Save the Lakes timeline and doing some research on the Internet … you can find out a great deal about how the decision was made by the owners of the golf course to set out on a pattern to consciously disregard what they were otherwise required to do.”

Barnes, who has 41 years experience in commercial and real estate litigation, presented the lawsuit to the members of Save the Lakes on Monday morning. He said the goal in crafting the lawsuit was to keep the intent narrow in order to get a ruling quickly.

Save the Lakes, a group of residents seeking to keep the Lakes property operating as a golf course, is not listed as a plaintiff in the case because Save the Lakes itself does not own land within the area. The two plaintiffs in the case will take on all the liability if the case does not go in their favor.

Many residents remember years ago trying to sue Presley Corporation to save the tennis courts on 48th Street and Warner Road. The homeowners lost that case and were forced to pay $1,000 each when Presley filed a countersuit. The courts were not protected by CC&Rs. The golf course is.

“The reason we’ve done it the way we’ve done it is you can contribute to the fund to pay legal expenses, but your name is not going to be on the document,” said Ben Holt, president of Save the Lakes.

During the meeting Monday, the Save the Lakes board asked members for monetary donations to go toward the lawsuit. They estimate it will take $50,000 to try the case.

“When we started this, we all made pledges saying we would support it if we needed to go to court,” said Dan Sherman, board member of Save the Lakes. “After all the thought and reasoning behind what Tim just went through is the fact that now is the time to do it. We need to put (Lakes owner Wilson) Gee in his place.”

There are four owners of the course listed in the lawsuit: Bixby Village Golf Course Inc., Hiro Investment LLC, Nectar Investment LLC and Kwang Co. LLC. The case was filed in Superior Court of Maricopa County.

The course owners are also facing a $1.6 million tax bill in 2015 for closing the course.

The owners have signed a memorandum of understanding with Pulte Homes to purchase the land. Pulte needs approval from 51 percent of homeowners within the Ahwatukee Board of Management to change the CC&Rs that would allow the company to build 250 homes there. It’s unknown how many consent signatures Pulte has gotten. The homebuilder’s plan for the land can be found at pulteahwatukee.com.

Save the Lakes has been collecting their own signatures — more than 2,200 — from homeowners supporting the CC&Rs and keeping the golf course. For more information on Save the Lakes, visit savethelakes.weebly.com.

Ahwatukee letters: The lake is back after Monday’s storm

Wow, all that rain. Have you passed by the Lakes “golf course” since the storm? The lake is …

Owner of closed Lakes course may have to repay $1.6M in tax benefits

Wilson Gee may be forced to pay up to $1.6 million in tax benefits to the county for closing…

Phoenix’s problems are all about the numbers, DiCiccio says

All the problems the city of Phoenix faces go back to the numbers, City Councilman Sal DiCic…

On Aug. 8, I read an article written by Dan Tamblo, a good writer. I have also read a few ot…

According to a feasibility study commissioned by Save the Lakes, the Lakes Golf Course, unde…

Pulte opts out of Lakes contract

Pulte has announced it is no longer in contract with the seller of The Lakes Golf Course, just over a year after signing a memorandum of under…

People have asked: Why are two Ahwatukee women, Linda Swain and Eileen Breslin, suing Wilson Gee and his international partners to restore The…