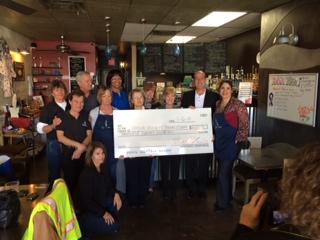 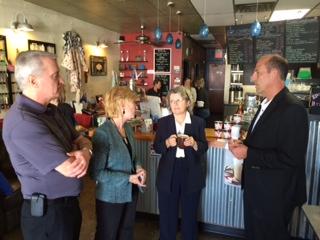 One cup of coffee can help a battered woman reclaim her life.

That’s the idea behind Cup O’Karma, a coffee in Mesa that is used to further the mission of the National Advocacy and Training Network (NATN). The revenue from that shop is used to provide shelter for abused and battered women who’ve been turned away by other shelters for various reasons including substance abuse problems. The shop itself is staffed by volunteers and abuse survivors looking to gain new skills.

NATN was founded in 2002 by Ahwatukee Foothills resident Monalou Callery. A survivor herself, Callery said the more she got involved in the system the more she realized how difficult it was to find help for some women.

“I started noticing the more professional the fields got the more exclusive they were for battered women,” she said. “A battered woman with substance abuse issues or mental health issues couldn’t get the help. My thinking was it was a miracle I didn’t become a drug addict to cope with the trauma you continually go through. For me it took eight years to get a divorce after I left my husband. All the stuff I had to go through during that eight years was as bad if not worse than when I lived with him.

“What I started seeing was that the very field we expected to help us was turning women away if they were not Betty Crocker. I thought no body deserves to be abused. No one.”

Callery originally started by offering training and counseling and eventually she was offered an empty home to use as a shelter. Word of her small shelter spread quickly and Callery began needing more space. In 2008 she and some of the women living in her shelter were selected to participate in an entrepreneurial pilot program that taught them how to write a business plan and other business basics.

As the program came to an end Callery said a local coffee shop owner, who was planning on closing his shop to go back to school, overheard their conversation and offered to donate all the assets from his shop to them.

“We didn’t know what we were doing but the owner took three weeks out of his time and showed us everything there was to actively run a business,” she said. “From then on we used the coffee shop as a job training site for women that lived in our home and needed a different skill or a skill.”

Today NATN has four homes in the Valley, two for single women and two for women with children. Each home allows women with substance abuse problems. One home is dedicated to women veterans. Women are allowed to stay in the homes for up to two years but during that time they are given all the resources they need to turn their lives around.

Cup O’Karma is located at 1710 W. Southern Ave. in Mesa and a second location will be opening soon in the Chandler Public Library. Callery said she hopes to open a location in Ahwatukee Foothills if they can find an affordable space or a business owner willing to donate some space.

Recently City Councilman Sal DiCiccio was able to raise a private donation of $2,500 from CVS Outdoor for NATN. That donation will go toward opening up a new Cup O’Karma location.

“She’s one of those gems that we have in our community that deserves a lot more attention,” DiCiccio said of Callery. “If you look at Ahwatukee Foothills we’re a great place because we have so many great people. That’s what makes us special. Most people don’t know how special people are and how much work they do in our community. Monalou is one of those amazing people.”

Just have fun: Parents and youth sports can get out of hand

The other day while running errands, I was listening to ESPN Radio (yes, women like ESPN too…

Valley View Community Food Bank in Youngtown will be even busier this summer and needs more food for the next few months once school is out. Jesse Ramirez, executive director of the food bank, said many families ask for food from the organization in the summer because their children are at home more often. Just in time, Valley View received extra help in the form of a $1,000 check.

Gilbert firefighter in new league of her own

City Councilman Sal DiCiccio is on a mission to make sure golf courses in the city of Phoenix stay beautiful.

The city of Phoenix has collected more than 13,000 ideas and comments on how to draft the new 10-year general plan and what should go into it.

The Christian’s need for Karma

I’m often surprised at the frequency in which I hear a Christian bring up Karma. As applied, Karma is the great balancer in the universe to ri…

You have a good point here!I totally agree with what you have said!!Thanks for sharing your views…hope more people will read this article!!! Coffee Dorks

Although it is possible for a barista to obtain their job skills by attending barista training courses Barista, they are usually taught on the task by longstanding employees.

I require to discover your web websites in which you have truly examined on-line networking sites areas. These days the globe is so quick alongside new advancement are can be found in a market. Soon, the Social media web page internet site ends up being a substantial framework anywhere throughout the globe. family lawyer kennewick