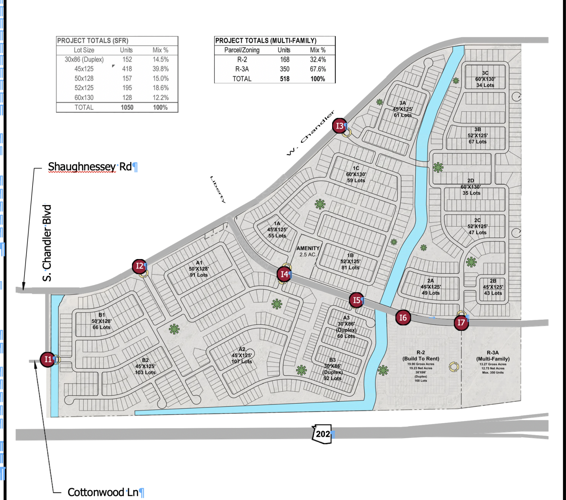 The major artery through the 373-acre Canyon Reserve development in Ahwatukee is an extended Liberty Lane, seen here with numbers representing main intersections. (City of Phoenix) 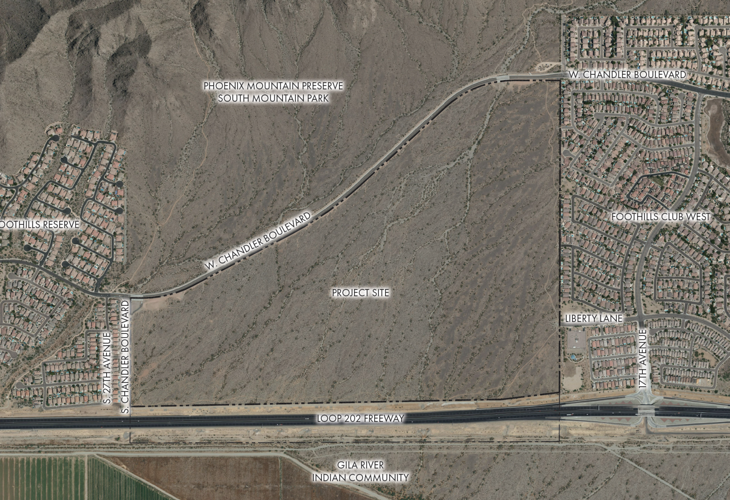 The 373-acre Canyon Reserve development in Ahwatukee will bring 1,050 mostly single-story houses, 150 build-to-rent townhouses and 329 apartments to Ahwatukee on what had been State Trust Land. (City of Phoenix)

The major artery through the 373-acre Canyon Reserve development in Ahwatukee is an extended Liberty Lane, seen here with numbers representing main intersections. (City of Phoenix)

The 373-acre Canyon Reserve development in Ahwatukee will bring 1,050 mostly single-story houses, 150 build-to-rent townhouses and 329 apartments to Ahwatukee on what had been State Trust Land. (City of Phoenix)

The first public step in the Canyon Reserve developers’ effort to get the city approvals they need to begin building the mammoth Canyon Reserve community on the former State Trust Land parcel in Ahwatukee has turned out to be a stumble.

Though Reserve 100 LLC/Blandford Homes was scheduled to go before the Ahwatukee Foothills Village Planning Committee next Monday, the virtual hearing was abruptly canceled last week by the city Planning and Development Department.

The committee was scheduled to hear a formal presentation on the developers’ request for a General Plan Amendment to reclassify Chandler Boulevard from 19th Avenue to 27th Avenue, along Canyon Reserve’s northern and western boundaries.

The reclassification basically would keep both Chandler Boulevard segments as they are and the developer would not be required to pay for either stretch’s widening.

“The reason the GPA is not scheduled for May is because the Street Transportation Department is still analyzing the request and has not provided any recommendation,” Planning Department spokeswoman Angie Holdsworth told AFN. “As a result, we would not be comfortable providing any hearing dates.”

During an informal presentation at the VPC’s April meeting, the developer’s zoning consultant, Alan Beaudoin of Norris Design, gave the panel an overview of the timetable for city approvals set out by Reserve 100, a Blandford Homes subsidiary, for a development that will include 1,050 mostly single-story houses, 150 build-to-rent townhouses and 329 apartments.

That timetable envisioned a planning committee recommendation May 23 and a hearing before the city Planning Commission June 2 that would lead to a recommendation to City Council before its last pre-summer-recess meeting July 1.

Since the VPC meets only once a month and is not scheduled to meet next month until June 20, City Council likely won’t get the Planning Commission recommendation until late August at the earliest.

The impact of the delay on the developers’ plans to begin construction late this year or early next and begin selling homes in 2024 is unknown.

But it won’t stop the development, since the land was zoned more than 20 years ago for homes.

A traffic analysis performed for the developers by Kimley-Horn and Associates projects Canyon Reserve will generate 13,704 vehicle trips a day with roughly 1,100 during the morning and evening rush hours.

In new documents related to the development obtained last week by AFN under a state records law request, Norris Design told city planners that reducing S. Chandler Boulevard’s classification to a local street “will not impact the roadway’s capacity to operate sufficiently and will better suit the limited trips that this roadway incurs.”

It also said that W. Chandler Boulevard can be kept as-is because “the roadway will still provide expected service capacity without over-building.”

“With the replacement of Pecos Road with the Loop 202 freeway, and no provided access, there is no need for S. Chandler Boulevard to continue south of the future Canyon Preserve entrance or remain classified as collector roadway,” it continues.

“The proposed modifications to the roadway classifications will be sufficient for planned development and match the character of this Ahwatukee Foothills Village neighborhood,” Norris Design states, adding “ the proposed roadway sections will meet traffic demand and anticipated capacity.”

“Maximizing the efficiency of roadways is beneficial economically for the City of Phoenix,” the application continues, stating “reducing the size of roadways lessens the burdens of infrastructure and maintenance costs.”

It also says reclassifying the two boulevard stretches “will not detract from the walkable and bikeable nature of these roadways but instead enhance them.

It also said that besides being less harmful to the environment, keeping the boulevard at its present width “will enhance the active lifestyle and Sonoran desert character of the area.”

The General Plan Amendment application does not discuss Liberty Lane, which would be extended through Canyon Reserve as the development’s main artery to South Chandler Boulevard.

It recommends restriping that intersection for “exclusive left turn lanes for all approaches” but notes: “It is not expected that a signal will be warranted at this intersection."

However, noting "this intersection is anticipated to operate with acceptable delays as an intersection by buildout of the development," it concedes a signal may eventually be needed.

“It is recommended that vehicular volumes be monitored and evaluated as surrounding development occurs in order to determine the appropriate time for the addition of signal control at this location,” it states,