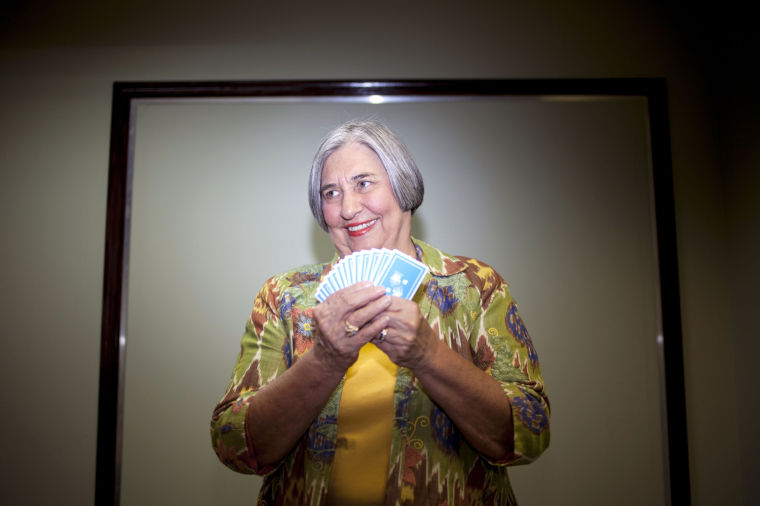 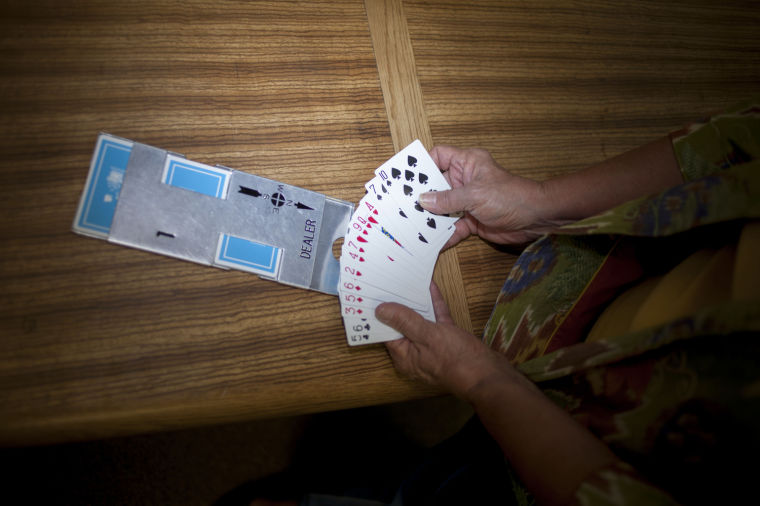 Ahwatukee Foothills resident Adele Verkamp may not look serious and calculating from the outside, but her years of experience playing bridge may say otherwise.

Verkamp has been playing the classic card game for more than 40 years and has been teaching it to others for nearly 15 years. She says it’s a game of skill and players must analyze their moves carefully, but it’s a game meant for anyone with a competitive bone in their body.

Verkamp began playing bridge in college. At the time it was popular to play bridge in groups at the student union. From there she continued to find groups close to home to play with and began competing here and there.

“The bridge bug bites you,” she said. “When I had small children it was my thing to do to get away. One thing leads to another.”

Verkamp now has competed in national competitions several times and is ranked a Gold Life Master (the highest ranking is a Grand Life Master) in duplicate bridge. What she loves about bridge competitions is meeting people from all over the world and competing with the very best.

“Bridge is different from anything else,” Verkamp said. “If you were a golfer, if you could play the same round as Tiger Woods that would be a thrill. In bridge, if you’re playing in an open game, you could end up against the top players that are well known all over the country just because they are there and you’re there, and they play against everybody. I’ve played against the very best.”

In fact, Verkamp has played against Bill Gates and Warren Buffet, who were partners for a game at one competition she attended.

Over Thanksgiving weekend Verkamp will join more than 5,000 players in a national tournament at the Sheraton Phoenix Downtown. The tournament will go for 10 days and will be surrounded by several clinics and workshops open to the public. Players of all skill levels are welcome to attend the tournament or any of the clinics to learn or perfect their game. There are three national championships each year, but Verkamp said it has been 11 years since one has been hosted in Phoenix.

“Having it in our own backyard is exciting,” she said. “It’s an international event. There are many foreigners who will compete… It’s very serious. People still enjoy the game, but players are very focused. I just love to play.”

Verkamp is encouraging all her bridge students to take advantage of the clinics being offered by the tournament.

“It would be a sad day for bridge to go away among all the other distractions in the world today,” she said. “We need to get the younger generation involved.”

For novice players or those looking to get reacquainted with the game, Patty Tucker, American Contract Bridge League accredited teacher, will be hosting a “Learn to Play Bridge In A Day” seminar at the Hyatt Regency Phoenix on Dec. 1 from 1 to 6 p.m. for $20.

For more information on the tournament schedule, classes, or how to participate, visit www.acbl.org/nabc.

City of Phoenix offices will be closed on Thursday, Nov. 28, and Friday, Nov. 29 in observance of the Thanksgiving holiday.

Being a mother has caused Jennifer Swisher to be more aware of the chemicals she’s bringing into her home through food, but while on vacation …