You are the owner of this article.
Edit Article Add New Article
You have permission to edit this article.
Edit
Home
News
Sports
Art & Life
Community
More
Obituaries
Sponsored Content
Contact
Classifieds
1 of 3 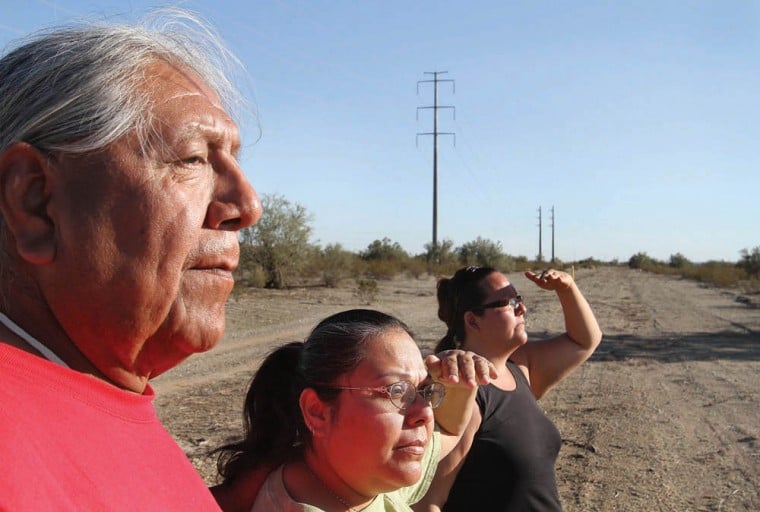 Looking back on their homes and neighbor's homes, Michael Tashquinth and his wife Antonia and neice Danelle Spring stand in the middle of their tribe's land where a projected freeway could run right down the dirt road they're standing on. Jan 31, 2012 Darryl Webb/AFN 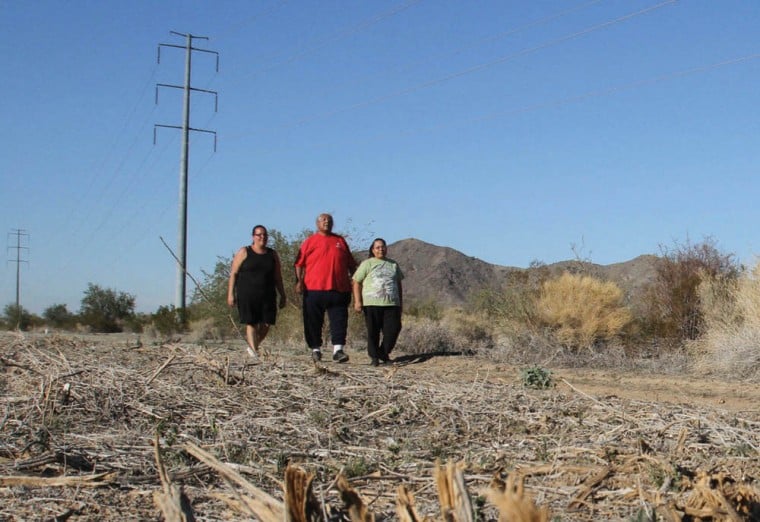 Walking down a dirt road where a projected freeway could run Michael Tashquinth his wife Antonia (right) and niece Danelle Spring (left) make their way across their tribe's land southwest of South Mountain. Jan 31, 2012 Darryl Webb/AFN 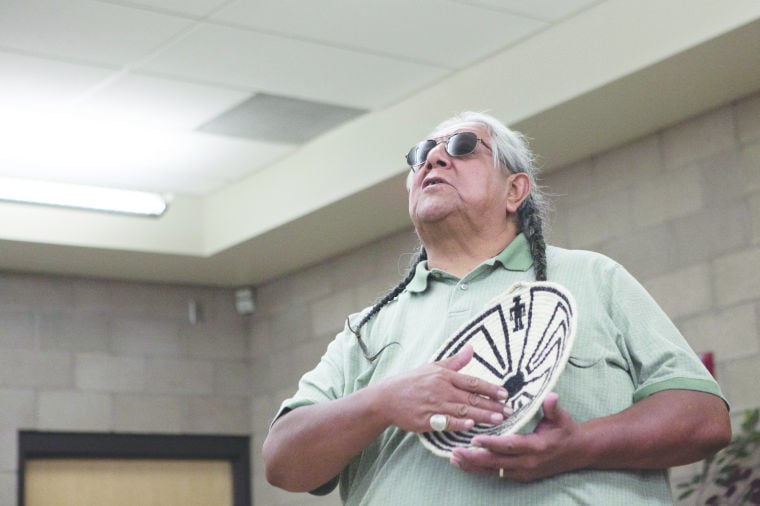 Gila River Indian Community member Michael Tashquinth speaks about the importance of South Mountain to their community during the Protecting Arizona's Resources and Children (PARC) meeting about the South Mountain Loop 202 Freeway expansion at Pecos Community Center on Saturday, May 11, 2013.

Looking back on their homes and neighbor's homes, Michael Tashquinth and his wife Antonia and neice Danelle Spring stand in the middle of their tribe's land where a projected freeway could run right down the dirt road they're standing on. Jan 31, 2012 Darryl Webb/AFN

Walking down a dirt road where a projected freeway could run Michael Tashquinth his wife Antonia (right) and niece Danelle Spring (left) make their way across their tribe's land southwest of South Mountain. Jan 31, 2012 Darryl Webb/AFN

Gila River Indian Community member Michael Tashquinth speaks about the importance of South Mountain to their community during the Protecting Arizona's Resources and Children (PARC) meeting about the South Mountain Loop 202 Freeway expansion at Pecos Community Center on Saturday, May 11, 2013.

Editor’s note: This is the final installment in a six-part summer series on the proposed South Mountain Loop 202 Freeway.

There has been a struggle going on within the Gila River Indian Community (GRIC) concerning the South Mountain Loop 202 Freeway.

The tribe voted in February of 2012 to support a “No build” option for the freeway, but the Landowners believe that no build will not be supported by the Arizona Department of Transportation (ADOT) and that putting the freeway on tribal land is the only way to save the mountain. That is why they collected signatures to rescind the tribe’s vote. It was decided on July 3, after investigating those signatures, there were not enough valid ones for the initiative to continue.

The Landowners initiative was the last effort to have the freeway built on tribal land. With no other alternative ADOT has named the Pecos Road Alignment as the preferred alignment for the freeway.

Tribal officials have not taken a solid position on the freeway as the Landowners initiative has worked through tribal council. Now that the initiative has been defeated, officials are still being impartial.

“The Community will continue to work with all the interested parties, both within the Tribe and outside the Tribe, to ensure that the Loop 202 process is brought to the best possible conclusion for the Community,” said a statement from the tribe.

Members of the GRIC who have stood on the “No build” side from the beginning say the results of the initiative are the end of one battle, but that they plan to continue to fight to save the mountain and stop the freeway.

The main concern for members of Gila River Against the 202 is pollution. GRIC land lies between the Estrella Mountains and South Mountain. Community members fear if a freeway is placed between those two mountains the pollution would be trapped over the community.

Lori Riddle, founder of Gila River Alliance for a Clean Environment (GRACE), knows how pollution can affect a community. Her family grew up on a Superfund site on the reservation. The chemicals have caused numerous health problems for her family. Riddle herself, at 46, has already had several surgeries this year alone.

It’s the reason Riddle has become an outspoken advocate against pollution.

“Sometime ago someone asked me why I was fighting a freeway through my community and it didn’t relate to anything I had gone through or been exposed to,” Riddle wrote on the Facebook page of Protecting Arizona’s Resources and Children, a group she has become very involved with in the past year. “As I thought more on it, it became clearer that these things are related. The Superfund site I was living on was an old pesticide airstrip, the chemicals there were (as I was told) similar to Agent Orange and as I learned more about Agent Orange and the symptoms associated with it I began to find out, for example, dioxin was found among the chemicals that were uncovered in our property. Well, one of the substances that would be released into the air from vehicle exhaust would be dioxin furans.”

There are several community buildings along Pecos Road on the GRIC land that care for children and the elderly. There are also health clinics that will be within a few miles of the freeway. That’s a scary thought, said Mike Tashquinth, a community member.

South Mountain has cultural significance for the GRIC. It’s the origin of their creation story and the center of their universe.

A popular basket design depicts the story of life for community members. A man stands at the entrance to a maze and the beginning, like the beginning of life, is fairly open. Things get more difficult in the middle and harder to navigate, but once the person gets to the other end they’ve learned a few lessons and the path is open before them once again. In the center of that basket, Tashquinth said, is South Mountain. That same image is used in the great seal for the Salt River Pima-Maricopa Indian Community. The mountain has significance to several tribes in Arizona.

Beyond the mountain, the land itself is pristine. Tashquinth recalls as a boy his father taking him to the top of the Estrellas and showing him the communities which could be seen far in the distance.

“He told me 30 years from now you’ll see lights everywhere,” he said. “I thought, ‘What is he talking about?’ As I’ve grown here, even without my eyesight I can remember what used to be out there. It’s grown. If I went up there now all I’d see is lights.”

Tashquinth says he was always advised by elders to protect the land.

“I remember one of the elders told me the only way the white man can ever have our land is if we give it away,” he said. “It’s up to us… We are an island in Maricopa County. We are what’s left. All this land used to be ours.”

Joseph Perez, founder of Pangea Development, the corporation helping facilitate the Landowners efforts, said he believes the freeway would be important for the tribe because it would bring much-needed economic development. He has presented the Landowners with statistics about the poverty and crime rates on the reservation, which he says are shocking compared to the rest of Maricopa County. He believes true economic development, brought on and controlled by individuals, could help. Members of GRIC Against the 202 disagree. They believe the cure to the problems rests in the people.

“There are pockets of people working to revitalize culture through agriculture and cultural events,” said Renee Jackson, a member of GRIC Against the 202. “Out there it’s portrayed that we are desolate and on the brink of extinction by our own hands. What’s not being taken into account is the effects of colonialism and that there are a lot of people working hard to make this community a better place both officially through the tribal government, but also community members who are leading this cultural revolution.”

Jackson said the demonstrations against the Loop 202 being organized by GRIC Youth are an example of the people beginning to take a stand. Several youth have formed the Akimel O’odham Youth Collective and have shown up to ADOT forums and meetings in T-shirts and masks protesting the freeway.

“This fight for the mountain is important because if the fight is lost it has a devastating effect on the moral of the community,” Jackson said. “Once that moral is affected, …if we take that hit and lose the mountain to this freeway it will only get worse. The problems will increase, the gang violence, the alcoholism. This fight for the mountain is important because of that. We’re providing a united front to save one of the last bits of our culture that we have left.”

The Draft Environmental Impact Statement (DEIS) recently released by ADOT does talk about coordination with GRIC. ADOT has hosted several community forums on GRIC land and has promised to continue to work with the tribe on any issues that can be mitigated. The latest resolution from GRIC, the one passed in February 2012 which supported a “No build” option, is the last official input on the issue from the tribe.

Several community members are working with groups in the greater Phoenix area, including Ahwatukee, to fight the construction of the freeway.

Pangea plans to continue to work with Landowners to develop their land. Pangea projects that the South Mountain Loop 202 Freeway going down Pecos Road will only benefit the Landowners. The City Concept developed by Pangea does not depend on the freeway being built.

The DEIS is available for public comment through July 24 at southmountainfreeway.com.

Editor’s note: This is part five of a continuing summer series on the proposed South Mountai…

Editor’s note: This is part four of a continuing summer series on the proposed South Mountai…

Editor’s note: This is part three of a continuing summer series on the proposed South Mounta…

Editor’s note: This is part two of a continuing summer series on the proposed South Mountain…

Editor’s note: This is part one of a continuing summer series on the proposed South Mountain…

The 90-day comment period on the Draft Environmental Impact Study (DEIS) for the proposed South Mountain Loop 202 Freeway ends this week on July 24.

Ahwatukee groups turn in 300 pages of comments on Loop 202