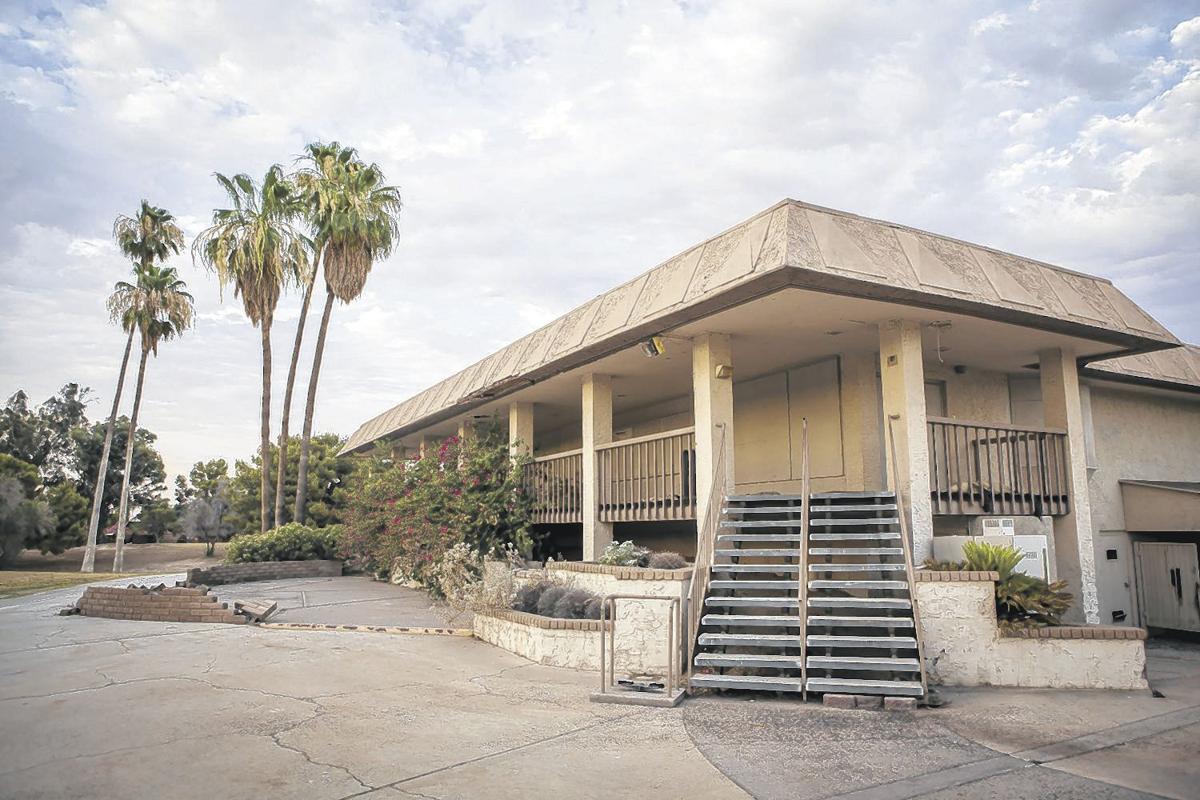 From August 2015, the clubhouse has become a haven for vandals. 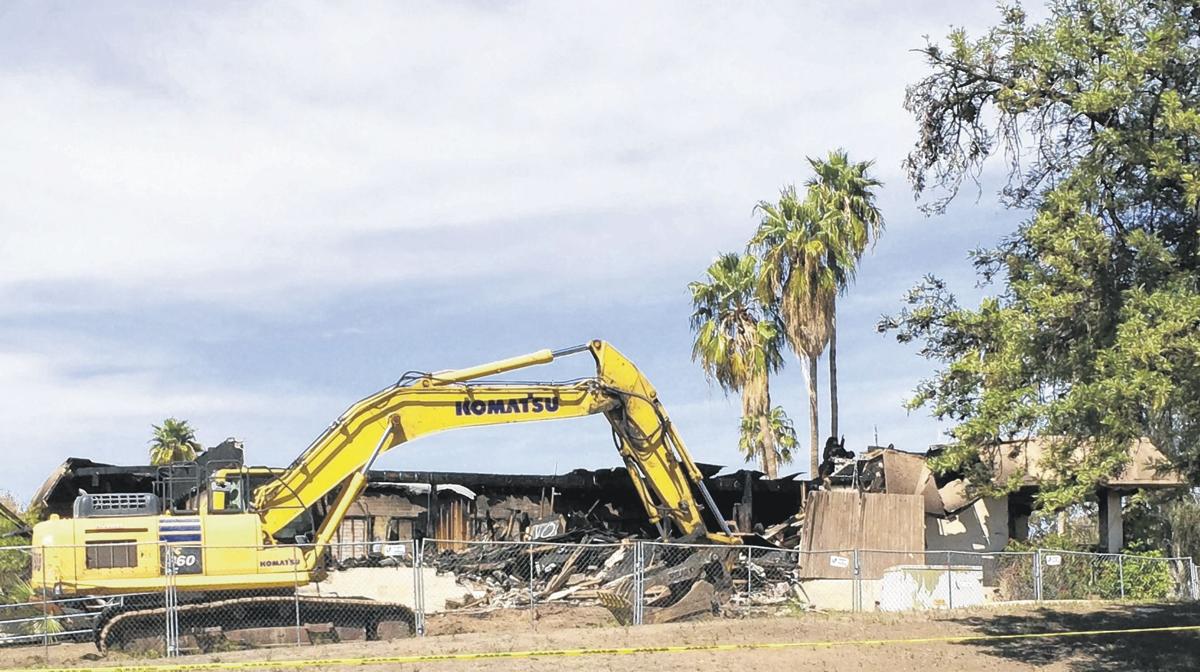 From August 2015, the clubhouse has become a haven for vandals.

The suspicious late-night fire that destroyed the clubhouse at the closed Ahwatukee Lakes Golf Course remains the subject of an “open investigation'' more than four months after flames shot through the sky and firefighters from three cities responded to put out the blaze.

From the start, news reports called the Feb. 28 fire suspicious, but proving that it was a case of arson and identifying a potential suspect is quite another matter.

A private investigation by the property's owners concluded it was arson. The official Phoenix Fire Department investigation leans toward arson but said other causes cannot be ruled out.

"They know the fire is suspicious. They found evidence that points to an accelerant being present.

“When flames are showing through the roof and there is some collapse, that tells us it had been burning for quite awhile,'' she said, adding that it probably had been burning at least 20 minutes before firefighters arrived.

Riddle-Bigler, who responded to the fire with dozens of other firefighters, said she could see smoke from Interstate 10 that night.

“It was a big fire. You have potential for the first-responders to get hurt,'' she said. “There was a large amount of fire. That structure practically burned to the ground.''

But one fortunate factor was that the clubhouse sat on an open piece of property and there were no potential exposures to the homes of nearby residents. No one was injured; firefighters saw parts of the building collapse and decided not to enter but instead take defensive tactics.

“It's still under investigation, and they have no answers,'' Riddle-Bigler said, referring to fire investigators. “We know there has been a political issue. That doesn't change anything as far as far as the investigation goes.''

That “political issue” involves a dispute between residents and the property’s owners over the future of the former golf course. The residents are suing the owners in an effort to force the course’s rehabilitation.

In a March 25 report to Fire Chief Kara Kalkbrenner, Assistant Fire Chief Kelvin Bartee wrote that investigators have identified the area of the fire’s origin but not the source.

Stating that causes other than arson cannot be ruled out, the report called the cause “undetermined.” No suspects had been identified, the report added.

“While evidence supports that this fire is human-caused, investigators currently are unable to disprove all possible hypotheses as required, Bartee wrote.

Those hypotheses included “reports of significant transient activity in the building for several months prior to the fire, and the inability to rule out multiple possible causes within the area of origin,” he added.

“For these reasons, the fire is currently classified as undetermined.”

Today, the former golf course in the 13400 block of South 44th Street, south of Warner Road, is a barren site. Only a couple of low block walls and a concrete slab remain as evidence that a clubhouse once existed on the property.

Cart paths lead to the site where the clubhouse once functioned as a place to pay for a round of golf or meet with friends.

But the paths lead only to something that looks more like a moonscape than a golf course. A few trees have survived, breaking up the otherwise drab surroundings. The outlines of some sand traps are easy to make out. A large, dry pit that once was a lake is prominent on the south side of 44th Street.

But there is nothing that even vaguely resembles a putting green or a fairway.

Police and firefighters say the clubhouse had become a haven for transients or possibly teenagers having parties.

“I am hoping for a resolution, not just a cause,” DiCiccio said, adding that the fate of golf courses in Ahwatukee is vitally important to residents because they provide open space. “We would like to find the people who did this.''

He said that the fire was suspicious on face value because city inspectors were scheduled to inspect the clubhouse the following day.

Instead, Bartee's report said, firefighters returned three days later with a dog trained by the federal Bureau of Alcohol, Tobacco and Firearms to sniff out flammable fluids. The report did not say if such fluids were found.

Dave Sabow, managing director for True Life Companies in Arizona, said an independent investigation by a well-respected arson investigator found it was a case of arson, with multiple points of origin and a substantial amount of accelerants.

He said the company had only liability insurance on the property.

“There was no benefit to us with that building burning down. In fact, it was a financial hardship” incurring $75,000 in demolition costs, Sabow said.

While it would be “incredibly expensive” to restore the golf course, Sabow said, “we are evaluating all options available. It would make practical sense to provide an amenity to the community of Ahwatukee.”

Quentin Thornton, project manager, said True Life had just installed new plywood and taken other measures to secure the building on the Friday prior to the fire. City officials notified the company that transients had entered the premises.

“It was bolted down tight,” he said. “What we are concerned about is that someone who would cause that big of a fire is still in the community.”

Riddle-Bigler said investigators are doing everything possible to identify the cause of the fire and have contacted school resource officers to see if they had heard anything from teenagers in the area. She said police had encountered problems with trespassing at the clubhouse.

The electricity to the building had been shut off, eliminating another potential source of the blaze, she said.

A Phoenix Fire Department Incident History Report does nothing to dispel the possibility of arson. It gives insight into what firefighters saw when they responded and how they decided to battle the fire, but it provides no official ruling on the cause.

Units were dispatched at about 11:30 p.m. and started arriving minutes later. A woman who called 911 at 11:30 p.m., identified only as a nearby resident, reported spotting flames inside the clubhouse. A second caller reported the clubhouse was a vacant building, according to the report.

By 11:50 p.m., firefighters had taken a defensive posture, realizing it was too late to save the building and fruitless to risk their lives by going inside the inferno.

A fire captain was asked at 11:43 p.m. if an interior attack was possible.

“We can make attack from here, but hesitated because patio is well involved and ready to come down probably,'' according to notes in the report.

His evaluation proved accurate at 12:15 a.m., with firefighters reporting a partial building collapse.

Anyone with information about how the fire started or who might be responsible is asked to call 480-WITNESS.