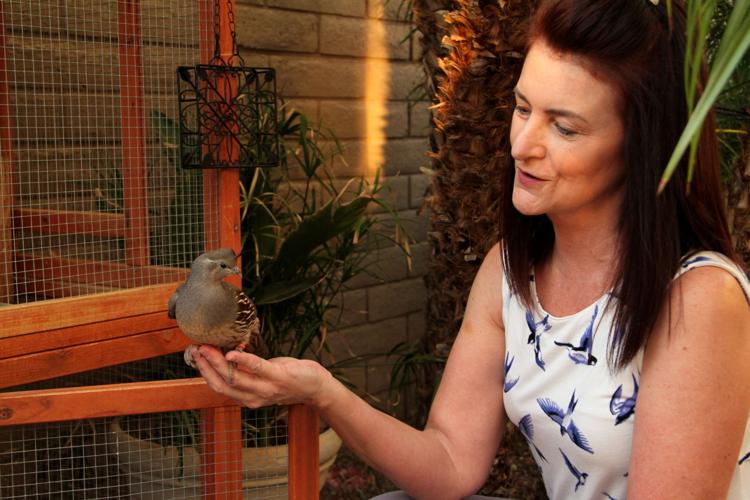 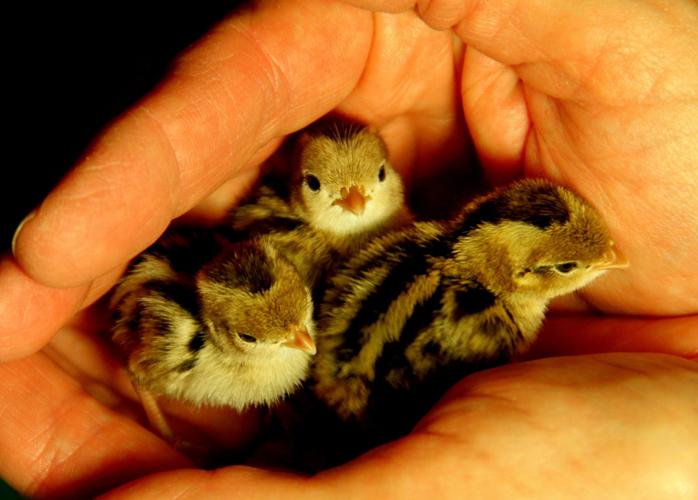 Seven hot chicks on the road and the 110-degree asphalt is nearly cooking them alive.

They popped out of their eggs that morning and hit the ground running, but they soon lost sight of Mom and Dad. Confused and lost, they waited on Desert Foothills Parkway for further instructions.

Six sisters and one brother with inch-tall tall, quarter-ounce brown-and-tan-striped bodies wilting on the scorching pavement.

Cheri Fromm came to the rescue, scooping up their fuzzy ping-pong ball-size bodies into a container. Within an hour, she had rehydrated them. Their energy and health was restored.

It was another episode in the life of the founder of the Quail Sanctuary of Ahwatukee Foothills, known affectionately as the “Quail Lady.”

When Fromm moved to Ahwatukee 20 years ago this month, she sought out a large, bird-friendly lot where her back patio faced an inspiring view of South Mountain.

She planted yellow bell bushes and Coral Fountain flowers to attract hummingbirds, and noticed the Gambel’s Quail loved to munch the yellow flowers.

After her three sons grew up and moved, she missed their chatter and liveliness. She began volunteering at a local animal rehabilitation center, and a feeling of connection and fulfillment seeped into her life again.

Fromm grew up in a beach house in Seattle. One spring, she and her family noticed  mallard ducks and their broods of ducklings paddling in the bay.

Thirteen ducklings. The next day only eight ducklings.The next day, they saw only five ducklings left. The seagulls and occasional raccoon were feasting on the vulnerable ducklings while they were awkward and not yet waterproof.

Fromm’s mother talked her father into building a duck shed in their yard. When they saw newly hatched babies, they coaxed the mother into the shed and the babies followed. Two weeks later they had grown bigger and faster, adept at staying close together.

Fromm opened the shed and the family emerged, no longer an easy catch for predators.

As a teenager, Fromm often carried a duck or two in her Schwinn bicycle basket and became known as the “Duck Lady.” Her mother thought she’d grow up to become a marine biologist. Instead she moved to the desert and began a career in the airline industry.

This year she has cared for over 100 quail chicks so far. She also has a pet starling, Tango Loco, that likes to say, “Hello, crazy bird lady – I’m the most intelligent bird in the world!”

He sings and whistles every jingle he hears on TV.

Sleeping on top of Tango Loco’s large cage is a juvenile grackle, recovering from a large pox on his face that Cheri successfully treated.

Two more cages are brimming with the high energy of rescued lovebirds cuddling on their perches, squeaking to one another. Each is recovering from an injury.

A couple of feet away is a large cardboard box with netting on top. A brooder light shines down to warm six quail chicks. Five were brought to her after being trapped in someone’s garage for two days, dehydrated and stressed. She rehydrated them subcutaneously.

A sixth newborn arrived after walking up on a hiker’s foot in San Tan Valley. The hiker waited for more quail to appear, but they never did. She found Fromm’s quail sanctuary online and arranged to bring the chick over immediately.

Fromm’s kitchen island looks like a doctor’s supply station, with syringes, bottles of antibiotics and steroids and bags of rehydrating liquid.

A monthly calendar is filled with details of arriving birds, with their condition, age, treatment and the occasional triangle symbolizing a death.

With three dedicated helpers, her quails have a 91 percent recovery rate.

Fromm is one of several bird rescuers in Ahwatukee.

Paul and Gloria Halesworth were wise mentors to Fromm when she began taking in quails.

They took in 10,000 birds over the 15 years they ran Wildwings Rehabilitation out of their Ahwatukee home. Hummingbirds were their specialty.

They urge people to keep their hummingbird feeders clean by changing them every two or three days in the summer.

“If there is any black mold in the feeder, it can cause a hummer’s tongue to split. Some of them can be saved with antibiotics, but it is a slow and painful process,” said Paul.

They urge people to take the feeder down if they’re not going to be at home to clean the feeder often.

“Make hummingbird formula with four parts water to one part white sugar. Boil the water and stir in the sugar until it dissolves. Then let it cool.”

The Halesworths still get calls from Liberty Wildlife and East Valley Wildlife to pick up large birds of prey found injured in the area. They are the only ones that know how to handle their sharp talons when transporting them.

Pam Horton specialized in pigeons and doves in her Lakewood neighborhood home for 10 years.

“I took in the common birds no one else had room for. I never turned an animal away.” Arthritis has prevented her from caring for wildlife since 2015.

Nancy Eilertsen of Chandler founded East Valley Wildlife in 1989. She organizes a network of wildlife rehabbers working out of their homes. There is no central facility. She often gets 50-80 calls a day during the busy season of March through August.

“Volunteers juggle rehabbing with work and family obligations. Each handles different types of animals. Never leave an animal on a volunteer’s doorstep. Between feral cats and the extreme heat, that animal won’t have much of a chance,” Eilertson said.

“The most important job a wildlife rehabilitation center can do is to teach the public to understand and respect wildlife,” she added.

As monsoon season kicks into high gear, Fromm will get large amounts of chicks due to interrupted hatches caused by storms.

The mother lays eggs over several days. Because it’s so hot, the eggs start incubating before all the eggs have been laid. The later eggs cannot catch up in development.

Even after the mom has left the nest and taken the hatched chicks, the summer heat continues to incubate the abandoned eggs. The remaining chicks that hatch are born orphaned.

As for the seven hot chicks that Fromm rescued from the scorching pavement, they all are doing fine.To her great joy, Cheri released the now 12-week-old mature quail back into the wild – strong, healthy and ready to face anything.

Candidates on the issues