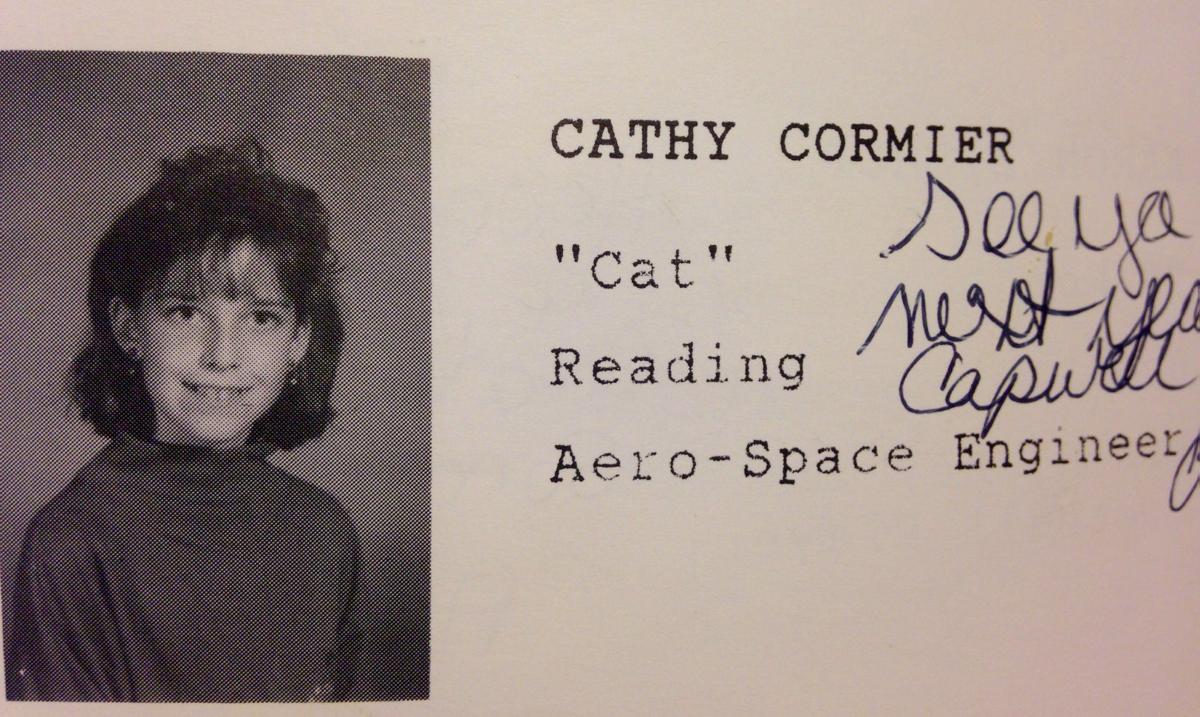 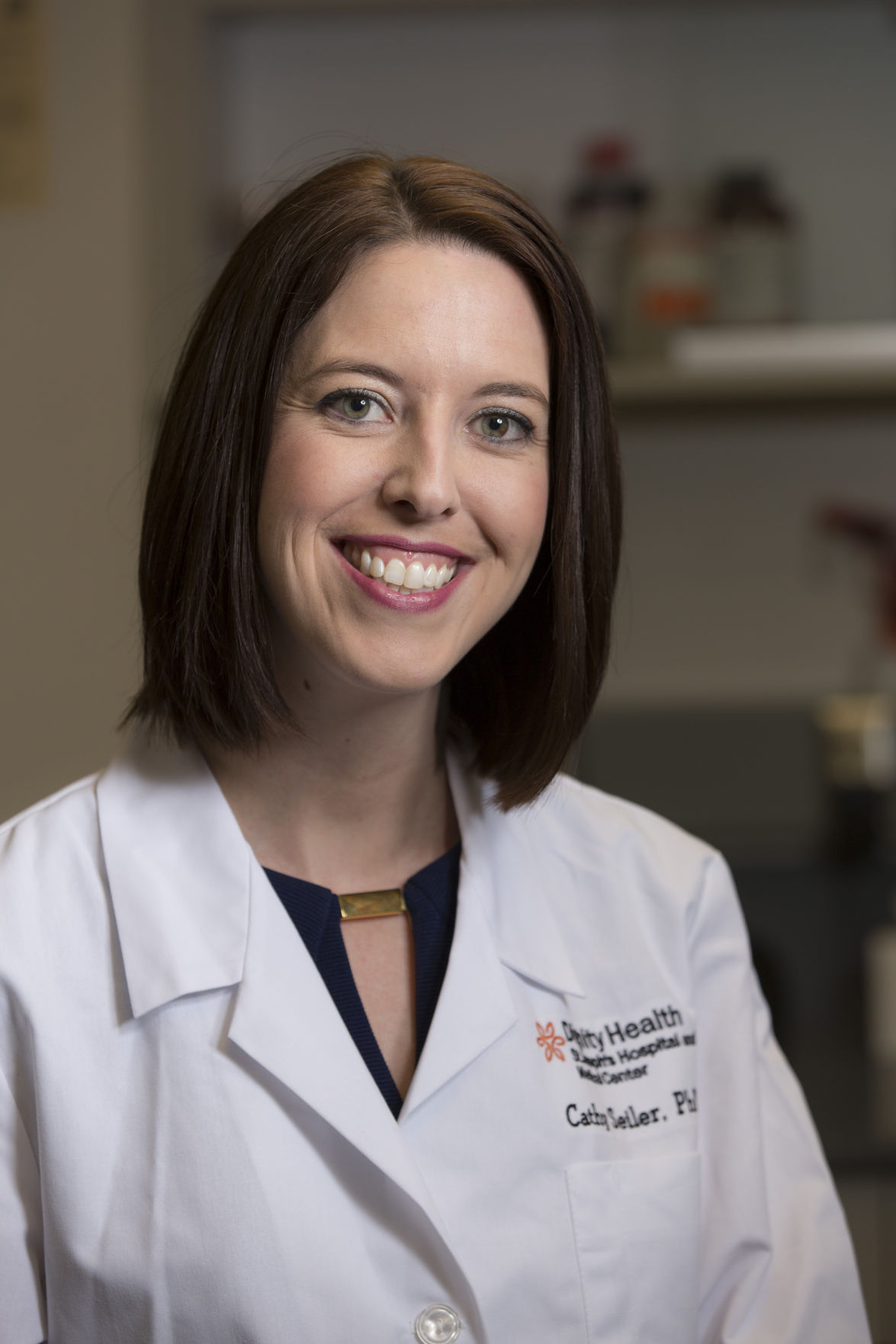 Dr. Cathy Seiler is the Program Manager for the tissue biorepository at St. Joseph's Hospital and Barrow Neurological Institute.  She has her BA in Biochemistry and Molecular Biology from Boston University and PhD in the Biological Sciences from Cold Spring Harbor Laboratory.  Her research and teaching focuses on genetics, cancer, and personalized medicine.

I LOVED SPACE.  I loved space so much that in the sixth grade I spent most of my time at recess – without shame – with a friend planning on how to create a tractor beam (for those who aren’t complete geeks, that’s the force in Star Trek that allowed the Enterprise to latch on to other spaceships).  Our solution – a very big, long rope. Completely ignoring my fear of heights or adventure rides, I was convinced that I was going to be the female Jean-Luc Picard.  And as everyone else wrote in their sixth grade yearbooks how they wanted to be a teacher, doctor or lawyer, I wanted to be an aerospace engineer (and I honestly cannot believe that I’m showing the proof with my sixth grade yearbook photo).

With this deep-seeded love of astronomy, you may be asking yourself how I became a biologist?  In my senior year of high school, I attended a Boston University Medical Center program called City Lab.  This was a six week program that my mom drove my friend Missy and me to (an hour each way in rush hour traffic) so that we could do a lab experiment.  Each week, we spent several hours in the Boston University lab doing different parts of the experiment I describe below.

The goal of this experiment was to take a piece of DNA that coded for the green fluorescent protein (also known as GFP) and put it into a piece of DNA that could make bacteria glow green.  We haven’t talked in detail about genes or protein expression yet, so I’ll stick to the basics. GFP is from a jellyfish called aequorea victoria, and it’s what makes the jellyfish glow green.  A scientist isolated this one gene, and if transferred properly into another organism, it can make that organism glow green.  And yes, people have tried this.  People have created GFP rabbits and mice and…NO, NOT PEOPLE.  Why not?  Well, first, because it’s highly unethical to do genetic engineering in people for no clinical reason (and having glowing eyebrows will not cure any disease).  Also it’s very difficult to manipulate the DNA in humans for a variety of reasons that we will discuss when talking about gene therapy.

So, at City Lab our job was to cut the GFP gene using restriction enzymes (which are essentially DNA scissors that cut DNA in a specific place) and then insert the GFP gene into another piece of DNA using ligase (essentially, DNA glue).  This new piece of DNA (called a bacterial expression vector) makes the GFP protein in bacteria cells.  When the GFP protein is expressed in bacterial cells, the bacteria glow green.  It was easy to figure out if your six weeks of effort was worth it if your bacteria glowed green.

OUR EXPERIMENT WAS THE ONLY ONE THAT WORKED. Not only had we understood how a piece of DNA worked, moved it from one place to another, but we then were able to get it to do something in a bacterial cell.  At the time, I didn’t realize that this was what scientists called “recombinant DNA technology.”  I didn’t know that this was used all of the time in the laboratory as a foundation of molecular biology studies.  I had no idea that someday I would be managing a facility that stored hundreds of thousands of these pieces of DNA to help researchers worldwide with their experiments.  I only knew the thrill of “discovery” and I wanted more.

That’s how I became a biologist.

Dr. Cathy Seiler is the Program Manager for the tissue biorepository at St. Joseph's Hospital and Barrow Neurological Institute. She has her BA in Biochemistry and Molecular Biology from Boston University and PhD in the Biological Sciences from Cold Spring Harbor Laboratory. Her research and teaching focuses on genetics, cancer, and personalized medicine. Find her on Facebook at www.facebook.com/thingsitellmymom

Things I Tell My Mom: You’re what kind of scientist?

I was one of those people who wrote in their college application essay that since I was seven years old I wanted to cure cancer. And I truly did (long story for another post).

Read more from Dr. Cathy Seiler on her blog.

Things I Tell My Mom: What is a scientific society and why do you join them?

When I first met my husband, he saw on the top of my pile of mail a magazine for the "Protein Society".

Things I Tell My Mom: What is a scientific meeting like?

As I mentioned, I'm at the International Society for Biological and Environmental Repositories (ISBER pronounced "is-burr") meeting this week, so I'm going to talk about what it's like to attend a scientific meeting.

Things I Tell My Mom: What are all the "-omes" in science?

If you're into yoga, you may be very familiar with "OM" or if you're an electrician with "ohms", but in science, we use "-ome" in a very diffe…

Things I Tell My Mom: How and why do cells divide?

You started off as one cell: one tiny little zygote containing a full set of DNA (23 pairs of chromosomes).  As an adult human being, you are …

Things I Tell My Mom: What is a biobank? And why do scientists collect human tissue for research?

Things I Tell My Mom: What is a biomarker? A cornerstone of personalized medicine

What is a biomarker? Biomarkers are biological measures of health or disease and are a cornerstone for personalized medicine. Historically, di…

Things I Tell My Mom: Why did I leave the lab? My career path

I received a question over email about why I'm a program manager and no longer doing research at the bench. You may remember how I originally …

Things I Tell My Mom: How do you find a biomarker? The needle in the haystack

Biomarkers are biological substances that can be measured to indicate some state of disease.  They can be used to detect a disease early, diag…

Things I Tell My Mom: Why is the specificity of a biomarker important? PSA for prostate cancer as an example

I've described what biomakers are here and how they are discovered here. I've spent so much time discussing biomarkers because this is one of …

Things I Tell My Mom: Why can all of your cells commit suicide?

We've discussed how cells can grow and divide through the cell cycle and a process called mitosis.  Equally as important to cells growing and dividing is the ability of cells to die.

Things I Tell My Mom: Does the media sensationalize terrible science? Oh, yes

The other day, I was drinking a glass of wine with a friend of mine, and she mentioned a story that she recently read in Scientific American c…

Things I Tell My Mom: What is a cell? Based on a conversation with my husband

I was at an awesome brewery in Flagstaff over the weekend (shout out to Historic Brewing Company) with my husband.  Over a beer and homemade chips, we start discussing science.

Things I Tell My Mom: What is it really like to be a woman in science?

Things I Tell My Mom: Book Club – A Short History of Nearly Everything

I love reading popular science books.  Not only are they fun and interesting to read, but they usually have historical and contextual information about science or scientific discoveries that add to my understanding of the science itself.

Things I Tell My Mom: Why is water so interesting? (Featuring Olympic Gold Medalist Misty Hyman)

I met Misty five years ago in Valley Leadership as members of Class 32 (Best Class Ever!!) We became fast friends, even though you may not expect a scientist and a swimmer to have much in common.

Things I Tell My Mom: Are you tired of people insisting you "find your passion?" Develop a life philosophy instead

Everyone these days goes on and on about passion.  If you don't have passion for something, you would be led to believe that you won't get int…

Things I Tell My Mom: What is my genome? And does size matter?

I would be interested in knowing how often the popular press has used the word "genome" in the past year (I couldn't find this kind of study, but let me know if it exists).

Things I Tell My Mom: What are vaccines and how do they work?

Vaccines are a hot topic. Vaccines bring up lots of discussion, lots of false information, and a vitriolic passion rarely seen in matters of science and pseudoscience.

Things I Tell My Mom: Why should you vaccinate yourself and your children?

Vaccines are a hot topic. Vaccines brings up lots of discussion, lots of false information, and a vitriolic passion rarely seen in matters of …

Things I Tell My Mom: The American Plague, The Untold Story of Yellow Fever

Yellow fever is an awful disease that over 200,000 people per year contract, causing over 30,000 deaths. This disease causes fever, chills, na…

Things I Tell My Mom: Are vaccinations needed after a stem cell transplant?

Vaccines are a hot topic. Vaccines bring up lots of discussion, lots of false information, and a vitriolic passion rarely seen in matters of s…

Things I Tell My Mom: What is that? A liquid nitrogen freezer

This is a new feature called "What is that?" where I will show a photo of something from the lab and then discuss what it is, what it does, an…

Things I Tell My Mom: Can your body contain DNA that isn't yours? Yes! Chimerism

There was a House episode (Season 3 Episode 2 Cane an Abel) about a young boy who was convinced that he was being probed by aliens.  Through a…

Sorry, there are no recent results for popular articles.