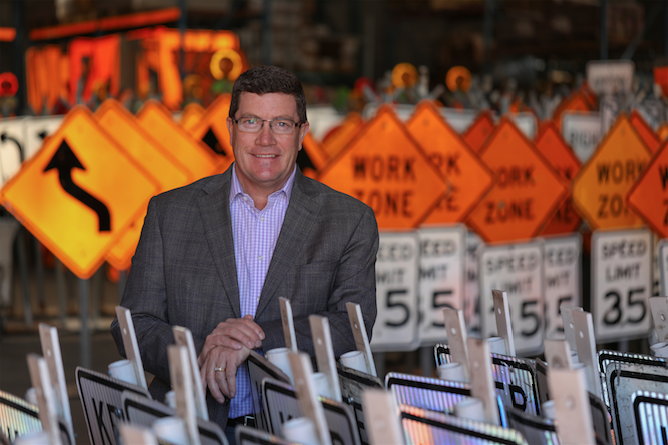 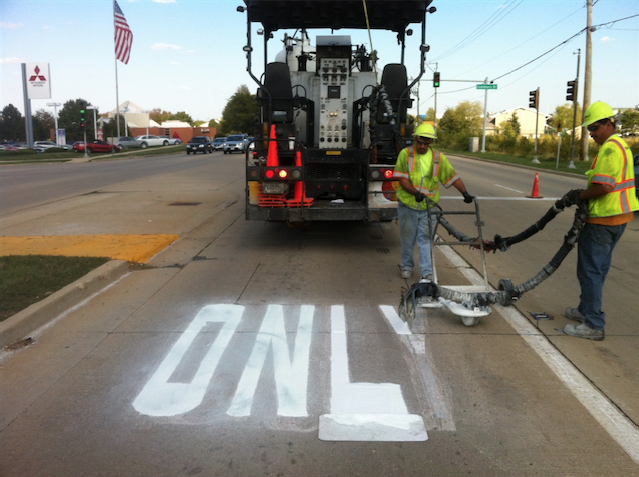 Like most motorists, Dave Meirick gets impatient in a traffic jam at a road construction or other traffic detour site.

Unlike most motorists, those concrete barricades, traffic cones and flashing LED signs also mean money in the bank for the Ahwatukee man.

Meirick is president and CEO of RoadSafe Traffic Systems Inc., the nation’s largest provider of the wares and the technologies used for pavement marking and traffic-control services.

With over 50 locations in 40 states employing more than 1,500 people, the Phoenix-based company is the construction worker’s best friend, keeping crews safe as they expand, repair and create streets and highways.

His company also sets up the barriers that keep runners in marathons safe from traffic and paints miles of streets with lane stripes, directional arrows and cautionary wording.

“We have about 1,300 vehicles of varying size, configuration and purpose; tens of thousands of barricades, signs and the like; and thousands of electronic (solar) boards used to direct traffic, both message boards and arrow boards,” he said.

In many ways, Meirick, who has lived in Ahwatukee with his wife Jan and four children for more than 15 years, grew up with the traffic-control industry.

He had only graduated a year earlier with a business degree from Luther College in Decorah, Iowa, when he bought his employer’s company and created Tri-State Signing in Iowa in 1987.

In 1999, he sold his company to NES Rentals Inc. and became its general manager of its Iowa traffic operations. He moved to Ahwatukee in 2001 to become a general manager and regional vice president for NES.

After NES sold its traffic division to RoadSafe in 2007, he rose through the corporate ranks.

He became chief operating officer for RoadSafe in 2012 and was promoted to president a year later.

“Dave has demonstrated great leadership of the company over his many years as part of the RoadSafe family and is most deserving of this position,” said CEO David L. Myers at the time of his promotion.

Along the way, Meirick and his employers benefitted from another movement that impacted the industry: municipalities, counties and states began getting out of road work and outsourcing projects and traffic controls to private contractors.

“The industry was evolving,” he explained. “States were going away from doing this themselves; they were laying off the liability and outsourcing. The whole industry grew up in the ’80s and ’90s. Today very little is done by governments.”

Working with a team of 10 executives, Meirick is one of the guys who paves the way for the road paving. He visits with companies, contractors and government entities across the country, working out contracts for jobs or all sizes.

It isn’t just contractors and government highway and streets departments that use the company’s services and products, either. Airports, stadiums, railroads, utilities, universities and military bases have all relied on RoadSafe to provide what they needed for either temporary or permanent traffic controls.

Some of those jobs have been huge, and others famous.

In Boston, for example, RoadSafe not only provided many of the traffic controls during the so-called “Big Dig” tunnel project. For nearly 25 years, it also has painted the Boston Marathon’s finish line and maintained the markings throughout the year.

It provided the controls for the Ohio River Bridges project that better linked Louisville, Kentucky, with Indiana and is responsible for a complex project involving I-5 around Denver.

And it provided the barricades and other controls for the two major political parties’ national conventions last year.

Closer to home, motorists have been detoured, delayed and driven by Meirick’s company at the Barrett-Jackson auto auction and the PF Chang’s Marathon.

It’s also likely his company will have at least some of the traffic controls needed for the South Mountain Freeway’s construction.

Besides growing, Meirick’s business also has seen a number of product improvements that have made things safer and quieter.

Loud, noxious diesel engines that once powered lighted signs have been replaced, for example, and more barriers are made of crash-worthy rubber instead of concrete.

He said the industry also is bracing for driverless cars.

“Occasionally, there are specifications in certain states that require some changes in our equipment,” Meirick said. “The focus on safety continues to be a priority for us and our customers. Soon, we will see more activity in the autonomous vehicle area, which creates interesting challenges in dynamic work zones.”

While the traffic-control business “is competitive at a local level across the country,” Meirick said RoadSafe has one advantage in the industry: “We are unique in our geographic breadth.”

But that doesn’t mean there aren’t challenges.

“There are always challenges,” he said. “Currently, labor is very tight across the U.S., and I don’t see that improving any time soon.”